So I have this issue with my 1990 GT where if it sits for 4-5 days or so it won't start. The battery is fairly new. It was charged up before winter and then disconnected where it sat for a good 4-5 months. Hooked it back up and it fired right up so I think the battery is OK. When running I am getting 14.6V so I think the alternator and charging system are OK.

I just did that draw test where you disconnect the negative cable and put the multimeter from the cable to the post. I have a draw of about 0.172A. I pulled all the fuses and relays/breakers from the panel and the only one that dropped it slightly was the airbag system fuse, but even then it only went down to about .158A so I don't think that is my issue. My electrical knowledge is not great at all so I was wondering if anyone had any ideas on where to go from here? I did disconnect the alternator just to see what happened - I read that sometimes something internal to them can cause a draw, but no change.

To my knowledge this problem is new, but the car was driven daily before covid so maybe it always had it and I just didn't know because it never sat more than a couple of days on the weekend...

So after a few days the battery has discharged enough to not crank the engine right?

That is correct. It seems like the turning point is about the 4th day. Turns over slow a couple times then just makes the clicking noise and needs a boost after that.

I’m curious to find out mine does this same thing. I’ve had an issue with my fog lights, recently I got them going again, but now every time I flip the switch it blows the fuse. Not sure what’s happening, or if that’s what is drawing power.

Start with a fully charged battery, using a dvm check the volts fully charge and disconnected from the car, wait a couple days, check the volts again, should be very close to the first check. Even a new(ish) battery can be bad, do you know how to load test it with a dvm?

If you have not figured this out yet I fought this for a long time on my 93 and it turned out to be the alternator. It put out the correct volts but something inside it was staying either shorted or damaged and it drained the battery. The minute I did my 3G conversion the problem went away. My battery was damaged and never took full charge afterwards so I ended up replacing it too later but the factory alternator was causing my problem. I tried finding open circuits everywhere and replaced all kinds of things in denial about it possibly being that alternator.

I may have to go drive the car around to make sure it is charged up. I don't have a charger. It is low at 11.7V now, but I can't say that isn't from it sitting with the drain on before I disconnected it. Can a battery consistently drain to the same amount and then stop or will it just keep going? I did check it before winter when I shut the car down and it was at that same 11.7V, but it hadn't dropped all winter and started the car which is why I thought the battery, though low, is probably OK.

As much as I would hate to have to replace a relatively new battery, it beats chasing an electrical issue (especially if there isn't one) or bigger items like a fuel pump. My concern with replacing the battery is that there is still that 0.17A draw. Unless that can be caused by the battery itself, if I don't find and fix that it will just ruin the new battery right?

I did just run out and disconnect both connections to the alternator - doesn't stop the draw unfortunately. I was told about an alternator upgrade for these cars so if I had to change it I would have been good with it.

I feel your pain. I fought with this for a year. Newish innerstate battery and alternator putting out correct volts but when I put my battery on the charger overnight the charger would never show that it finished. It showed good volts on the battery but then if I let it set a few days it was dead as a door nail. Check and clean all the grounds, the one to the block for sure, check all of the ones to the chassis for green crap, take the alternator and have it checked, check every connection even the solenoid. Make sure your interior lights arent staying on, like the one in the hatch area, make sure both door switches are good. Its usually either an open circuit or in my case like I said the thing I have never seen it was the alternator doing it. But I never tried un hooking my alternator overnight. Would never have guessed it was that.

If one of the 4 diodes in the rectifier in the ALt is bad, they can leak current. That draw is excessive. Keep disconnecting things till u find it.
Reactions: 1 users

HemiRick said:
If one of the 4 diodes in the rectifier in the ALt is bad, they can leak current. That draw is excessive. Keep disconnecting things till u find it.
Click to expand...

Good to know. If I disconnect both plugs to the alternator the draw would stop though right? Probably a dumb question, but electrical stuff is the worst for me, lol

Also, just found out there is apparently a fuel pump relay under the drivers seat. If I can get to that and pull it would the draw go away if the fuel pump is the issue? Assuming it even can be the issue....

Did you say you still had the stock alternator? If so to check, pull all the plugs from the alternator (I don't remember how many as I went 3G when putting my 90 GT back together - I bought it in pieces).

Thanks! Will check the fuel pump next... and hope it is not the cause.

It is still the stock alternator but I had both plugs to it disconnected and the draw was still there.

Move the seat all the way back. There is a bracket that the relay mounts to about middle of the seat (width wise) just behind the front seat mount structure on the floor. Undo the 4 seat mount bolts if you want if it is your first time (it helps to see the plug and relay), but I have disconnected many times without removing the seat. 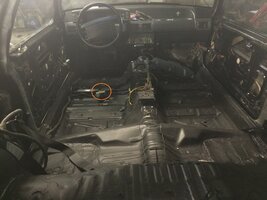 Perfect, thanks!. Odd place to put it but at least I can get to it

My draw was the lights in the vanity mirrors in the sun visor. The velcro closure had worn and would not hold the flap closed enough to press the switch and turn of the light.

So doesnt appear to be the fuel pump, and I am happy about that. I have heard the visor light before, but I dont think I have those lights. Will check tomorrow.

So if none of the fuses, fuel pump relay or alternator appear to be the issue, is there anything else that would make sense?

I am going to buy a charger tomorrow. I want to see if it takes a full charge and will hold it. After that I was going to check all the interior lights at night to be sure they are all off.

Yes it is, if still mounted it is between the air box and strut tower on the apron.

Might be time consuming to do this BUT.. Basically your looking for something that is staying powered after the key is off, or that is for some reason drawing amps off the battery. There is a way with a volt meter to check for this however like you I am an electrical idiot. I understand the concept but actually trying to find amp draw with a volt meter is voodoo to me. So what you can do is start with the obvious stuff and pull one fuse at a time, let the car set and see if the problem goes away. If lets say you pull the radio fuse for instance and you dont drain the battery than it MUST be something running off that fuse. That will at least narrow it down to an area to look. These cars are old enough at this point that there is all kinds of weird things done. Mine had an aftermarket alarm system with keyless entry installed probably some time in the mid 90's that was non functional and extracting it was a nightmare, and my speaker wiring has all been re run with something non factory so I have double wiring there too. Most of our cars probably have sad stories of things like this so any number of things could be causing your issue. One bad exposed wire somewhere touching metal could cause what your seeing and its hard to find.
Show hidden low quality content
You must log in or register to reply here.