You are using an out of date browser. It may not display this or other websites correctly.
You should upgrade or use an alternative browser.
W

Hiya all!!! I've lurked around on this forum for a long time as a reference tool but never took the time to register till now. I had a 94 GT for a few months that I sold back to the previous owner as it would have taken me too much work to get into the shape I wanted it in. Side note: I am disabled so what work I can do on my project is limited but it still doesn't stop me from doing what I can!! My current project as stated in the title is a 90 LX with a 351M in it and a C6 behind it. Originally it was a 4 cyl car but someone crammed this beastie between the fenders!! It's still a stock engine with no mods done to it. The body is really cherry tho, underneath it is no rust, no wrinkles, nothing twisted at all. Every panel on it still has the factory VIN number on them, it's never been in any accidents, or had a rebuild title on it.. that's why I named it Cherry Bomb!! The worst thing that's happened to it was the previous owners bought it with the 351M already in it, and parked it for 10 years in a garage.. never drove it, never cranked it, never did anything with it at all... So I'm in the middle of rebuilding the fuel system in it to begin with starting with the fuel tank and all the gutty works therein.. I've also gotten some assembly lube for the top end as everything under the valve covers is popcorn dry. That all needs to be disassembled, cleaned and lubed up. Carb (yup a 2 barrel!!) Needs to be rebuilt. And I already got a new HEI (yeh I know the other guys design) that I got at a really good deal and will do a lot better that the points style distributor that it has now!! With new wires.. I'm thinking with fundage and weather being the way it's been hopefully I can get her cranked up in another 2 or 3 months.. I've already pulled all the plugs, sprayed some WD-40 in each one and keep turning the crank over each day to keep everything moving.. I'll post updates as I can and try to get a build thread started on here if a pony powered by a boat anchor (lol) is worth resurrection!! Cheers!! 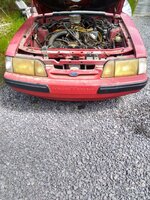 Well, since ya already have the 351M, run 'er till she pukes, then take advantage of the one good thing about a 351M... a 460 bolts to it's motor mounts and transmission.

74stang2togo said:
Well, since ya already have the 351M, run 'er till she pukes, then take advantage of the one good thing about a 351M... a 460 bolts to it's motor mounts and transmission.

Yuuuuirrrpp!!!! I like the way you're thinking!!! I've always wanted to do a big block in a fox body!!!

Oohhh boy!
Now that could be fun.
In a good way.
Show hidden low quality content
You must log in or register to reply here.

8
planning project of adding a supercharger

A
Electrical Help Me, Help My Fox ! 1990 Wiring Assistance please ?

D
When is enough, enough?