So I took the car out for a drive again tonight. When I was coming to a changing stoplight I had to come to a stop pretty quick, so I down shifted and braked. When I come to a halt the car had died. I tried to restart, but the battery was more or less dead so I had to push it off to the side. Thankfully a woman stopped about 10 minutes later while I was looking up roadside assistance through my insurance and offered a jump.

This is the second time in the past month, so I figure it's one of a couple different problems, or a combination of them all. The alternator is kinda old and I went with a remanned unit that was stock for the II, but can't remember which size I got. I know it was the bigger option that they had though.

The battery is a little over a year old and sits in the engine bay with no insulator.

And I've added the AF gauge, the new tach, and hooked up all of the corresponding lights.

I'm questioning if there's too much draw with the new stuff, or if the battery is trashed or just becoming heat soaked and not taking a charge. Interesting enough, I've not had a problem until now.

So I'm investigating relocating the battery to the hatch and upgrading the alternator. Anyone have any recommendations on any of this stuff?
Reactions: 1 user

LILCBRA said:
The battery is a little over a year old
Click to expand...

No 24 month pro rated battery warrenty?
Get a sealed one if installing inside car.
Reactions: 1 users

Sealed AGM battery if mounted inside, use a battery box for insurance.


When it comes to the alternator, upgrading from the Ford externally-regulated stocker to something better requires wiring. I run a Chevy 1-wire on mine, I think it's 65-amp. It handles everything but the initial surge of my Flex-a-Lite Syclone fan just fine (idle stumbles for about a second when the fan initially starts). That's while running the MSD EFI, MSD ignition, and electric fuel pump.

PowerMaster makes a 1-wire, 100-amp that is a direct-bolt-on physically for Ford now, but you'd still have to do the wiring.
Reactions: 1 users

Been window shopping, looking at an Optima Red Top as far as a battery is concerned. And I was looking at battery boxes on Summit, really leaning toward an aluminum box, but some of the reviews I've read say they're flimsy.

If it's going in the hatch, I think I'd want something fairly sturdy. Maybe a plastic box would be better?

And, for now, this is one of the alternators that is on my radar. By rewiring, do you mean disconnecting the alternator pigtail from the harness, doing away with the regulator, running the positive from the alternator to the battery positive and making sure the alternator case is grounded? It seems like it should be that easy unless there's something I'm not thinking of?

I will be mounting mine out back for obvious reasons as well. I always thought the battery placement in the ii's was hokey.
Too hot in there for a battery hence why they had to run a cooling port to it. With a hatch model, the concerns are obvious, so as long as it is a sealed battery and bolted down with heavy enough hardware to keep it from becoming a missile it should be fine. I wouldn't rely on just the box being bolted down though, a sturdy cross bar and bolts/redi-rod 3/8 minimum clear through the floor with a backer plate. under as well...
Reactions: 2 users

So something occurred to me earlier today while slinging mud on the drywall seams in the bedroom. I have a used 3G alternator of some sort that I got from the guy that I got a bunch of Fox parts from for the convertible.

So now it's looking like it's going to be the 3G alternator upgrade. Looking at different sources for wiring and whatnot, I see that LMR offers a conversion kit from PA Performance. They're out of stock right now, but I think that's the route I'll take when they're available.
Reactions: 1 user
I

I relocated my battery to the spare tire well. Used the Taylor box and a lead acid battery. Eventually I will get a sealed battery but the box is vented through the oval fill plug on the tire well floor. I used the spare tire hold down as one mount for now. When I get everything else sorted the gas tank will be replaced and I will drill through the floor then. I also use the t top tie downs too assist it staying in place. I ran wires into the small access panel on the passenger side and ran the positive wire to a bulkhead fitting at the firewall so no wires can be chaffed. The wire lays in the door sill channel. I grounded inside the battery box to the bolt through the spare tire hold down and ran another ground to the bracket at the trunk latch. I have 175 amp fuse holder near the battery but the fuse wasn't big enough for a hot start and has been bypassed for a couple months now. Worked fine for about a month of shakedown but a hot soak start popped it.

The Taylor box is kinda flimsy but not unexpectedly for an aluminum lightweight box. Once it's bolted together it does it's job fine.

Progress on this front today: the new wire harness and voltage regulator made for the swap arrived today. It's hard telling when I'll get to working on the install end of things though, my work schedule is all sorts of 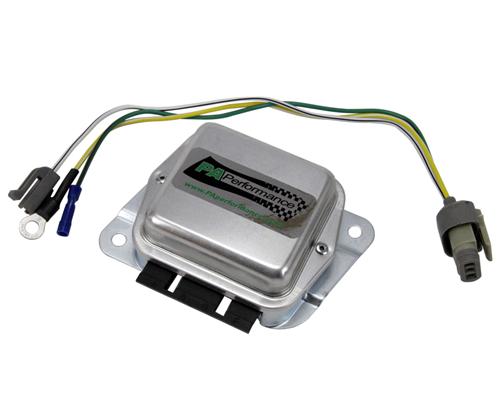 Upgrade from factory 1G alternator to 3G style and retain your factory wiring and gauges. 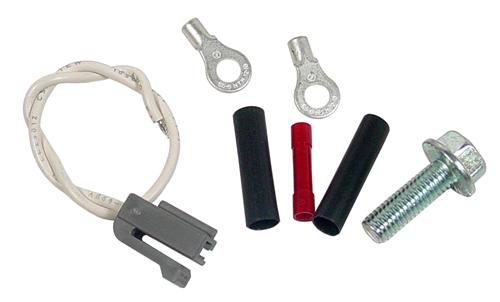 Easily finish up your 2G to 3G alternator conversion with this small parts kit from Late Model Restoration!

I've decided that I'm just going to get this done for the time being. As long as it works as it should I'll look at relocating the battery later.
Reactions: 1 users

Kinda bringing this thread back and "updating" I guess.

I had an epiphany last night that kind of goes along with all of this. I think I've decided that I'm going to remove the rear seats and go with a rear seat delete when I get around to it. It'll help in a number of ways for me. First, I don't have to have the rear seats re-upholstered, so that frees my front seat choices in a lot of ways since I wouldn't have to try to make the fronts and back match in material or in design. Second, I can incorporate that area to install my speakers and get rid of the antique 6x9 boxes I've been using. Third, it should remove a little weight from the car overall. Probably not a lot to really worry about for any reason, but it IS an advantage.

Besides, who's sat in the back of one of our cars? That area is damned near un-usable for anyone over the age of 10!

I think part of the inspiration came from @429MII and his chosen spot for his battery. It seems like a no-brainer now that I've seen what he's done, I may attempt to copy-cat it. I think that would give the interior of my car a fairly clean appearance. Then, really, all I'd have to worry about is having the headliner installed, buy new seats, and the interior is basically done! But, as I've mentioned a few times before, it's due for a redeux, so I'm thinking get the interior back into good shape, THEN have it repainted after relocating the battery, replacing at least the one rocker, and replacing the 2 front floor pans. Man, I'm itching to get back to working on the cars......

No more 6x9s in individual boxes that float around in the hatch area.... They'll actually be mounted instead.
Reactions: 1 user

Your still gonna be able to get a dozen girls in your car right?

2Blue2 said:
Your still gonna be able to get a dozen girls in your car right?
Click to expand...

My luck and experience with women has told me that I need to stay away from them, they're nothing but trouble! But it'll give my anxiety-filled dog a place to pace while on car rides....
Reactions: 1 users

You get the redeux complete; a young guy like you'll have 12 of them hanging around...just saying.
Reactions: 1 user

Enzio said:
You get the redeux complete; a young guy like you'll have 12 of them hanging around...just saying.
Click to expand...

You know with the rear seat delete you may get 13 or 14 in there.
Reactions: 1 user

I hear they stack better if you 'straighten em out first.'
Reactions: 1 users

2Blue2 said:
I hear they stack better if you 'straighten em out first.'
Click to expand...

Better throw them in the dryer, I hear they tend to shrink that way.

Enzio said:
You know with the rear seat delete you may get 13 or 14 in there.
Click to expand...

My preliminary plan as far as that goes is just removing the seats themselves and reusing the back as it's already hinged. Then all I really need to do is make a support or whatever we wanna call it for the front to block the area that would normally be occupied by the seat cushions and such. So I'm not really gaining anything if you look at it from the perspective of having the seats folded flat - which they are most of the time anyway.

On a side note, I HAVE fit somewhere near a dozen people in a Festiva, but that was back in high school.

The plastic cases (Moroso etc.) look a little tougher than the aluminum ones and they are sealed. I am now contemplating one as well...
Reactions: 1 user
Show hidden low quality content
You must log in or register to reply here.

Fox Battery relocation other than in the back??