Should have 5 lugged when I went Cobra, but I didn’t.

Yeah just make a generic account without any details. I don’t even think you need a real name.

Mustang5L5 said:
Yeah just make a generic account without any details. I don’t even think you need a real name.
Click to expand...

I cant stand the takers on Facebook... WAY too many talk about the " freebies" they are sitting around waiting for.....
The start of Atlas Shrugged........

Asphalt said:
I'm in the process of buying an '86 LTD (4 door Fox Body) & planing to do the 5 lug swap as well. I found it to be cheaper to just find a 94-95 Mustang project that needs engine work. I just picked this up two weeks ago for $600, the engine was taken apart and left to sit but it has almost everything for me to use for a manual & 5 lug swap, brake upgrade, & 17" wheels. Really have to keep an eye out, but it seemed worth it compared to what others out there are charging for the spindles alone. It was listed for $1,000 at first and said he was firm but after getting some new pic's showing it parked and covered in calked on pollen with the engine in pieces with rust on the pistons, cat's cut off & a small dent behind the drivers door I was able to talk him down. Found it on Facebook Marketplace, seems to be the only place that I can find project/parts car's at reasonable prices. Just have to filter through all the sketchy people selling their car's without titles or lack of communication skills.

It's not pretty, but as soon as my ruptured tendon heals I plan to give it a good wash & wax and sell off the rest as a project to someone else to recoup some money. May even keep it and build it as an autocross project.

I was almost tempted to just stick with 4 lug as well, mostly to keep it period correct but cost wise it was just cheaper for 5 lug. The ones I like are the LMR Mesh & TRX, but that would have pushed my budget too high & finding decently priced used 4 lug 16-17" wheels is getting difficult.
Click to expand... The pair on the bottom. This is what I ran for 3 years until I did 5 lug swap. They are 5x108 T-bird hubs re-drilled for the foxbody 4x108. Because the bolt circle is the same, you can use one of the lugs to center a template. I used a 4 lug drum as my template. Drill your three holes and re-install three studs. Voila, 4 lug hubs for SN95 spindles. If you are doing this, find the 89-90 T-bird hubs with the smooth back - this way you can relocate bolt holes. 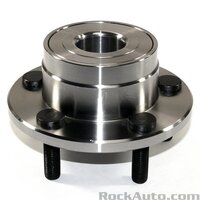 T-bird guys have been doing the reverse swap for years, putting SN hubs on T-birds, to get 5x114 wheels on their cars.

For rotors, depends how large a rotor you want. If you want to keep your 15" 10-hole or turbine rims, get a rotor from a 94 T-bird (96-98 Windstar, 96-99 Taurus) and redrill. These rotors are same diameter, width, height and hub diameter as SN rotors so a 99-04 dual piston caliper should bolt right up. Earlier T-birds have a smaller hub. For larger rotors, look at Jaguar and Volvo for rotors up to 15.75" in diameter (obviously at this size different calipers and adapter brackets will be required - but can be done with OEM parts).
Last edited: Jun 5, 2022
Reactions: 3 users

Thanks to all for the continued responses here. Much appreciated.

I’ll be going SN95 spindles, for sure. Still weighing options for front brakes. Fox length axles in the back, easy choice there.

I actually bought some 4 lug hubs for SN95 spindles awhile back from FoxBodyBrakes.com before they stopped offering them. They are beefy, but if I’m going to go down the rabbit hole of spindle swapping and whatnot, I’d just as soon go 5 lug for wheel choices. Oh well, live and learn. I keep telling my buddy that if he buys a foxbody like he always says he wants to, I’ve got a big bin of free parts for him.
Show hidden low quality content
You must log in or register to reply here.

Should I Get a New Clutch Fork and Pivot Ball Stud?

Drivetrain Can I use shorter than fox length axles?