You are using an out of date browser. It may not display this or other websites correctly.
You should upgrade or use an alternative browser.
D

Recently bought a 87 Fox that has the 5.0 swap mostly complete. Guy said all it needed was a wiring harness. Also, the donor car was a 91 I believe. What harness will I need and how hard will it be to do the re-wire?

This seem to be a popular thing, buying a 4cyl to V8 swap that one person started and for one reason or the other did not complete, first, they mostly lie, they usually don't finish it because they find that it can be a monumental task.
When done well it can be very satisfying. Here is some helpful info:

What exactly do I need to convert mine to 5.0

Okies folks it's time to make a junk yard shopping list! I have 2.3L 86 mustang LX 2.3 L with an automatic trans (13 screws no OD) I want to make it a 5.0 with Automatic (probably AOD because no computer)(stick is just sucky with me) I know I need a crossmember a K-member, the motor SEFI...

forums.stangnet.com
For your year car I would get a 87-8 v8 parts car and do the maf swap or find a 89 parts car, the 91-3 stangs have an air bag and other wiring changes that would make it more difficult.
Last edited: Jul 17, 2020
Reactions: D.Piper
D

It seems like the swap is mostly complete, entire drivetrain is swapped, has the MAF plugged into the intake. The guy said that he tried doing a custom universal harness and had the car running but said it didn’t run right. I was wondering if I could take the harness from a 91 and use it in my 87?
D

Here’s what’s been swapped from the 91 GT. Entire drivetrain, Springs, steering column. From what I’ve read all that needs complete is the wiring. I was just wondering if I could take the harness from a 91 GT or if I needed to buy a whole new wiring harness online built for these swaps.

D.Piper said:
It seems like the swap is mostly complete, entire drivetrain is swapped, has the MAF plugged into the intake. The guy said that he tried doing a custom universal harness and had the car running but said it didn’t run right. I was wondering if I could take the harness from a 91 and use it in my 87?
Click to expand...

The wire colors won't match because there was a change implemented in 91 for the wire colors for some of the engine mounted sensors.

An 87 computer wiring harness with an add on Mass Air conversion would be your best bet.
The conversion harness seems to work well for most folks. It avoids the compatibility problems in using a harness from the junkyard. Simple and cheap, actually less work that swapping the wiring harness.
Conversion Harness kits & parts 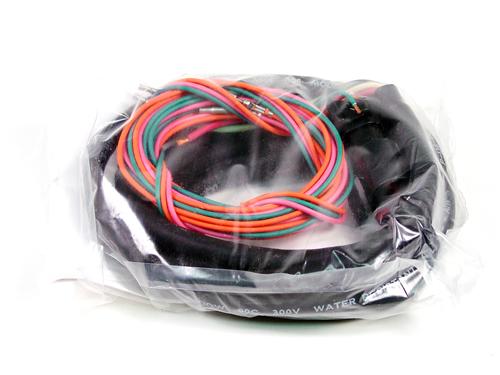 Looking to put a mass air meter on your 1986-88 Mustang 5.0L? We have you covered with this mass air wiring harness!

The note below said that the 91 computer harness is compatible, but I cannot verify that it is compatible.
Copied from bbunt302
Just for reference, here's a list of all the compatible years:

89 harness should work for 86-89 as long as you're using mass air.
90 harness will only work in a 90. (because of air bags and dual dash connectors)
91 through early 92 harnesses should be compatible (single dash connector, fuel pump relay under driver's seat)

Late 92 through 93 harnesses may be compatible (single dash connector, fuel pump relay under the hood). You may end up running some extra wire for the fuel pump relay. Comments and input from someone who has actually used the 92-93 EFI harness would be nice.
Reactions: D.Piper
D

Thanks for the help man I really appreciate it.
D

Any idea about the ECM? Will I have to take one off another car or I can I send the one from the 4cyl off to be reprogrammed. Looking for the cheapest way possible. Thank you.

No you cannot reprogram the eec. You need a new one.

wiring harness needs to match the body. For your 87, you’ll want an 87 V8 harness. All 87-89v8 harnesses should work, but there are subtle differences. Only 89 will have mass air so you’ll need to convert the 87-88 harnesses.

the older harnesses won’t work with the 91s guage cluster, or airbags.

also, pay close attention to the o2 harness as they are trans and year specific. The wrong one can fry and expensive $300 ECU.

welcome to the hardest part of a 4-to-8 swap
Reactions: D.Piper
D

Thanks for the help
Show hidden low quality content
You must log in or register to reply here.