Decided to spin this thread off from my main thread here due to answering this question more frequently these days.

No real questions here, just a thread to document what i've learned in this little project of mine. There is very little info on the net regarding this, i mostly had to peice info together that now seems very straightforward now from sources on the internet. I chose to install a 1993 OEM CD...

This thread focuses mainly on 1993 CD players for now, although there is some interchangeability for the 1993 premium tape deck as 94-98 SN95 radios are compatible. Same methodology for swapping the faceplate and tray applies


The two PREMIUM radio option for 1993 look like below. There was a non-premium cassette player in 1993 that looks similar, but has manual
FF/REV buttons. It is not compatible with the 1993 premium amp setup

Since original 1993 radios are hard to find, I decided to make one. These CD players (and even the 93 premium tape decks) came in other 90's Fords. The main differences are the botton tray is unique to the 1993 Mustang to mount the storage cubby, and the edge of the radio faceplate on the Mustang is square, vs other radios being rounded over. Scroll down to post #3 for the list of radios from other Fords

The bottom tray problem is easy. ANY 87-93 bottom tray can be used if you have one. The square face is trickier to find. Ford used it on the radios they put in the F150 and F250, and possible the ford escort, so those faceplates can be used in the Mustang. Another difference is the COLOR of the radio. Some of the Fords used radios with BLUE color LCD displays and buttons. Most are green fortunately. A lot of faceplates being sold on eBay as “nos Mustang faceplates” are in fact for other Ford radios. Pay attention to the edges, preset6/clock and color of the lcd lens (green vs blue). I honestly have not seen a true NOS Mustang faceplate for sale for years.

I used a bad 1993 radio donor for parts. It didn't work at all. Buttons had wear and were broken. But, it had the brackets and square face frame i needed.

For a new radio, I picked up a 1999 Contour CD player. If you search around, salvage yards have these for about $50.

Here you can see the bottom plate in which the storage tray attached. These interchange between the CD players, so it was an easy swap. Some of the bottom plates clip on, while others are held on by small torx screws. Remove, and swap. Very easy. Now the bottom storage cubby fits on.

You can see the subtle differences between the faceplates below. Top one with the square edges is the Mustang. The contour radio has rounded edges. The faceplates come off very easily, but you need to be careful. Simply pry the faceplate off VERY carefully. I had already begun disassembling the faceplates to swap the good buttons over to the cd player face with square edges

The faceplates come apart very easily. All you need to do is remove the clear insert from behind by unclipping the tabs on the 4 edges. Then the buttons pretty much come out after that.

If you are using a 1993 CD player as a donor, the only button you really need to worry about is the 6th preset/CLOCK button. If your new radio has the 6th preset, you'll need to swap this over to your original 1993 faceplate. Pretty easy to do. Yes, you will lose some originality, but you are probably swapping in a Contour CD player so originality is out the window anyway. 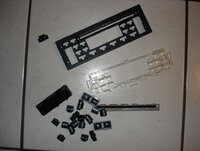 A little parts swapping, and you now have a new chassis wearing the correct foxbody specific parts. A LOT easier than trying to find (and pay for) a working 1993 Mustang radio. PLEASE BE ASVISED, a number of sellers have been selling “NOS 93 cobra/mustang radio faceplates” on eBay for a few years. If these plates do not have the squared edges and CLOCK instead of preset 6, they are not true mustamg faceplates. They are faceplates for the other various CD players sold in other vehicles.

SEE BELOW. This faceplates has a preset 6, and rounded corners. Not a Mustang cd faceplate 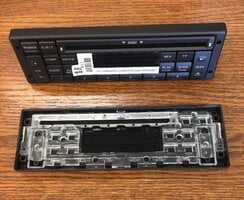 Here are the part numbers for various units if you want and try to locate some to use as Donors. The revision codes at the end (-AA, -AD) do vary so there may be more than what is listed below. I'm just listing actual part numbers I've seen 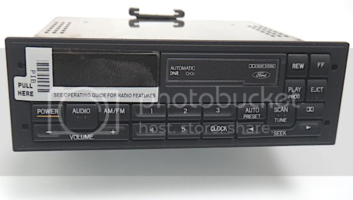 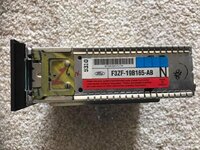