A slice of Shelby American, known as Shelby Performance Parts, has now officially announced some sweet body panel offerings for the 2005 – 2009 Ford Mustang. Back in January, we showed you a 2013 Shelby GT500 Super Snake (at the NAIAS) equipped with the Shelby Wide Body Kit, and it was just shy of completely awesome. After everyone saw the candy red Super Snake Mustang at the show, the requests soon started to flood in for the kit. The neat thing about this offering is those who want to get it installed don’t have to send their Mustang off to one of the Shelby facilities in Las Vegas; the kits can be installed by any reputable custom or body shop of choice.

The 2005 – 2009 Shelby Wide Body kits for the Ford Mustang are available in two versions: a complete package, which has both front and rear panels, adding 6″ of fender to the rear…and there’s also a rear-only option, if one doesn’t want to add any flare to the front quarter panels. Also included with both packages are a Shelby Billet fuel door, all necessary installation instructions, special tools, all the hardware required for the install.

Keep reading to get the rest of the details in the official Press Release from Shelby Performance Parts. 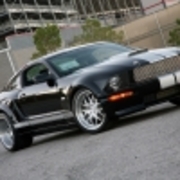 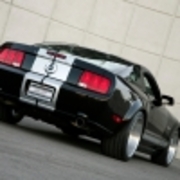 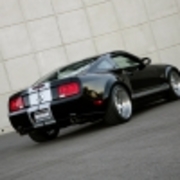 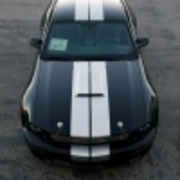 LAS VEGAS – April 2013 – Shelby Performance Parts (SPP), a division of Shelby American, a wholly owned subsidiary of Carroll Shelby International Inc., is now offering the sought-after Shelby Wide Body Kit for 2005-2009 Mustang and Shelby models. The kit, which was unveiled on the 2013 Shelby GT500 Super Snake at the North American International Auto Show in Detroit this January, is now available through SPP, giving customers the option to buy the kit and have it installed by a modification shop of their choosing.

“The Shelby Wide Body Kit, seen on our candy red Super Snake at the North American International Auto Show, resulted in so many requests from Shelby and Mustang owners, we immediately went to work developing a package to meet the demand,” said Shelby Performance Parts Vice President Jer Gervasi. “Now customers can have a Shelby Wide Body Kit customized for their ride, without shipping it to our Las Vegas facilities.”

The kit for 2005-2009 Mustangs and Shelbys is available in two versions. The complete package includes the rear quarter panels that add 6 inches of fender to house up to 13 inch rear wheels, as well as the front quarter panels that allow for 10 inch front wheels. The Shelby Wide Body Kit is also available in a rear-only option. Both packages include a Shelby Billet Fuel Door, installation instructions, special tools and all the necessary hardware for installation. However, the kit requires substantial body and paint work and is recommended to be assembled by a professional body shop.

The Shelby Wide Body Kit was developed exclusively by Shelby American to not only improve styling, but performance as well. With the ability to clear 345 wide rear tires, the Mustang’s power will hook up like never before.

The Wide Body Kits are available at www.shelbyperformanceparts.com or by calling (702) 405-3500.

StangNet members!! Check out our new knowmoto app and win a $100 gift card from Late Model Restoration.
StangNet created a new car social app called knowmoto! Add your Mustang or post a photo in the knowmoto app and enter for a chance at a $100 gift card from LMR. Click the LMR Logo for more about the knowmoto Mega Thread!
Show hidden low quality content
You must log in or register to reply here.