I've been having some overheating issues lately, and I think its an airflow issue. I have a dual core aluminum radiator with a sad little electric fan that covers only about half of the radiator with no shroud. The car runs about 230 on a warm day with a 180 thermostat. Using a mechanical gauge. Water hose to the radiator will bring it down to about 190 idling.

Does anyone have any recommendations for a good electric fan setup? I don't want to spend a whole lot over $200.
I was thinking about this one here.

I have the contour fan. It works well. I only need to run it at 50-60% full speed to keep my car cool at idle.

I’m using the mounting bracket kit with it. With it installed, the radiator has 100% full coverage. Looks very clean.


Keep in mind, the contour fan from LMR is just a parts store fan with the LMR premium added onto it (excellent customer service comes at a price). If you look around, you can find those fans much cheaper.

I got mine on eBay. 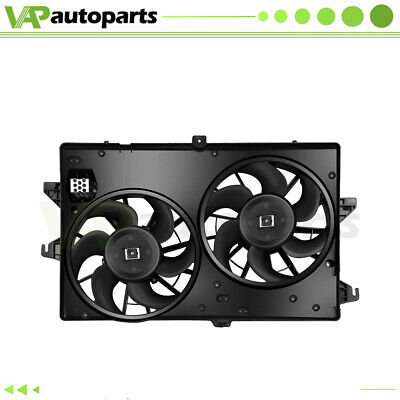 I would recommend the contour fans as well, mine is a used OEM unit (pulled from a former DD I still had around - I have two others on the shelf I pulled from wreckers - usually $20-30). Same aftermarket fan can be purchased from rockauto for about $100-120. I did a thread on how to reuse the contour wiring and control system (again all kinds of opinions of how to control them). If you have a good working control system for that single fan and want to keep it, I would connect it to the low speed system on the Contour fans and wire the high speed to a toggle switch in the event an emergency comes up and you need it. Low speed won't have a big current draw either.

I set mine up like the OEM Contour with low and high speed. I have a dual fan control switch installed in lower rad hose. In 5 years running this setup I have yet to have high speed come on due to temp. When driving/moving the fans never come on, only in stop and go traffic or standing still (idling) and then only low speed comes on, providing enough cooling. I have a 180 t-stat and an OEM style 3 core rad but would have no concern using the existing setup on the factory 2 core rad.

I recommend Contour fans, also. Mine were pulled from a car in the JY years ago and still keep my turbo car cool.
Reactions: 1 users
B

90sickfox said:
I recommend Contour fans, also. Mine were pulled from a car in the JY years ago and still keep my turbo car cool.
Click to expand...

What radiator are you running?

So I'll probably stick with the Contour fans... Will my stock alternator be able to handle the current they need? LMR states (16.6-42A Max). Also, does anyone have any fan controller recommendations?

93CalypsoConvert said:
So I'll probably stick with the Contour fans... Will my stock alternator be able to handle the current they need? LMR states (16.6-42A Max). Also, does anyone have any fan controller recommendations?
Click to expand...

Stock fox alternator? No I would upgrade that prior

bluestang50 said:
What radiator are you running?
Click to expand...

I have a Sheppard radiator. 3 row aluminum. I don't think they make them anymore.

I've measured the current draw. The contour fans pull 60 amps PER fan on startup. That's 120A for less than a second with both kicking on by way of a relay. After that, they settle down to around 25-27AMP continuous at max speed.

A soft-start fan controller will eliminate that initial spike. Your max current will then be equivalent of your max load at full speed, or about 26ish amps.

The initial spike (if any) should not be of concern (don't forget in a well designed system low speed comes on first and high speed only if necessary). The OEM Contour system uses a 70A relay to start both fans. One relay for low, one relay for high. The Contour has a 130A alternator. This factory designed system has been used all the Contours, Mystiques and 99-02 Cougars (as well as the Mondeo in Europe). It is a proven system that works and does not give ill effects if you replicate the system properly (not hard to do). I have owned 3 Contours for a total of 750,000 km of use. Never once a blip in the cooling system.
Reactions: 1 user
D

I suggest you check your fan relays to make sure they are working. I went through 2 radiators and a fan before I figured out the relay never provided power to the fan motors coil which spins it at high speed.
Put in a new relay box (body control module) and the overheating problem went away.

Why are you not running the factory fan? Incidentally if you are running a single speed fan and only have it hooked up to the slow speed relay you may find out when the car is moving the fan turns off. Been there to.

I tied both power feeds (high and low speed relay) going to the fan together to feed power to the single speed fan.

Mishimoto radiator, contour fans and a Derlale controller. My turbo car runs 180-195 degrees all the time. Even in traffic...in the heat of Hawaii.
Reactions: 1 users

Car is a 4cyl to V8 swap with a carb... Never considered using the factory equipment. How hard would it be to make it work? I have none of the factory coolant temp sensors installed.

I was looking at this fan controller here but I would like to have one with speed control.
B

Mstng93SSP said:
Mishimoto radiator, contour fans and a Derlale controller. My turbo car runs 180-195 degrees all the time. Even in traffic...in the heat of Hawaii.
Click to expand...

Now that is a first hand recommendation I'm looking for.

Any interest in the factory v8 clutch fan/shroud setup?

I used this fan. Cools a super charged engine without problems. I have a large inter-cooler with the Fluidyne radiator mounted in back of it. Using a fan with a shroud to pull air through all sections of your radiator adds to efficiency. They make this fan with different sized shrouds to fit the core of your radiator. Attach this to the top and bottom horizontal bar on the radiator. You may want to buy a piece of 3/4" aluminum angle from Home Depot to make it easier to attach.

A number of people have used the Contour fan successfully.

The controller is just as important as the fan. I was using 2 cheap 40 amp relays you buy through parts stores. The connectors which had large guage wires still melted.
After opening up my original factory fan controller and finding a melted circuit and relays I decided to use the new factory controller to pull in external high current relays. If you buy a controller suggest you buy a major brand with a good rating.

Agreed JY Contour or 99-02 Cougar dual fan. Flows far better than the parts store one. Grab the harness as well with the connectors. I've used a FAL33165 controller on a few cars that has worked flawlessly. You can also use a 75 amp circuit breaker but that would always run with the key on unless you wire in a switch.
Reactions: 1 user
F

I'm running a Mishimoto radiator, dual Spal fans and a DCC controller on my supercharged Fox Body and still have some cooling issues. I'm in South Texas where it gets super hot. At times my car will get up to 210ish if sitting too long. I'm looking at trying the contour fans just not sure if I can fit them with my supercharger set up.
Show hidden low quality content
You must log in or register to reply here.

Guys please help me out with coolant bleed