Help I want to put this T5 in our Cobra II

2Blue2 said:
I love the alternate view you have on parts, always interesting.
Click to expand...

I played a lot with lego, when I was a kid.

I'm using a stock replacement clutch cable. My car was an original 302 4 speed to begin with, but the original cable ended up getting burned through at the headers. I'm not sure if they're available anymore, but it seems I picked the replacement up from Advance Auto years ago, they had to order it at that time.
Reactions: 1 user
E

You will also need this adjuster tube: This is not reproduced, sadly. But perhaps you can fabricate something, if you get the original cable.
Reactions: 1 users

Someone was looking to make a steel replacement a while back, but I don't remember who nor if they ever actually started producing them. I think the best bet would be Classic Auto Reproductions, they may at least have a contact?
Reactions: 1 user

Here's one from MDL 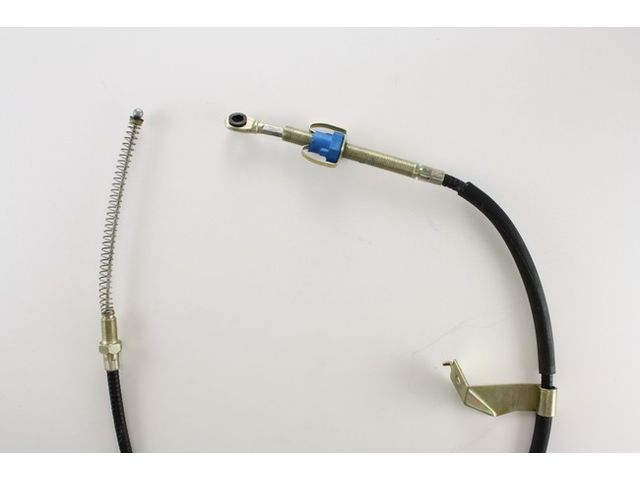 If MDL is just a acable without the firewall mount, this would be a much cheaper alternative:
https://www.rockauto.com/en/catalog...1134571,transmission-manual,clutch+cable,1972

And this are the right pilot bushings (with the needed outsert):
https://www.rockauto.com/en/catalog...transmission-manual,clutch+pilot+bearing,1964
Reactions: 1 user

I like that one better, especially the price. I may need to buy one to have as a spare.
Reactions: 1 user
E

Seems that shipping would be possible, they say world wide

But that are for sure no bolt-on parts...
And buy two sets because russian quality.

Now you got me wondering...the old mII.net used to have a build thread on someone who switched to hydralic. Geez I wish the tech from there was available.
Reactions: 1 users
E

There is no need to swap to hydraulic clutch. It was only cheaper for me than ordering parts with high shipping costs which I'm not sure if they fit. It is also tight beside the brake cylinder (there are some pics in my build thread). I was not able to find that adjuster tube... you have it, the cable clutch works, you will use the stock MII bellhousing... so there is no reason for this modification.
You can try here to find the build thread: https://web.archive.org/web/20170426022733/http://mustangii.net/
Reactions: 1 user

I look at the adjuster tube and think it won't get along with brake booster?

I need to go out and stare at car some more. The price is right even when buying two sets.

I converted an auto to manual years ago. I used the stock setup and was able to find an adjustment sleeve at a scrap yard. Chance of that now is real slim, but what I found was that the auto car already had the reinforcing bracket spot welded in place. You'll need to drill 3 holes once you locate the sleeve, 2 clearance holes for the mounting bolts/studs, and a larger hole for the cable. If memory serves, that hole is 1 inch, but you'll use the existing bracket as your guide. All you'll really need is a properly sized hole saw that fits that existing hole and you're good.

And I agree with @extra_stout for now. I'd say get your swap taken care of first, then go after the rear gears. I use 3.55s and @Enzio will be as well, I think they offer the best all around "feel." If you don't mind a little higher RPM at highway speeds, I think a 3.80 would work just fine too. Honestly, in the scheme of things, it's not a whole lot different than 3.55.

LILCBRA you running a bigger diameter tire, then the 3.55 is okay. Enzio has a smaller diameter tire than you (but bigger than stock), but the T5Z with 2.95 first gear, then the 3.55 is also okay. Most of the other T5s (including the V6) have a 3.35 first gear.
Another thing is you are running both upgraded engines and can turn them over 6000RPM and both cars have or will have a limited slip diff.
The rear gear ratio depends IMO strongly on the powerband of the engine, tire diameter, first gear ratio and if diff is limited slip or not. A stock 289 which shifts with stock C4 at around 5000 RPM would not love to have to much rear gear.
I would do it like that: T5 swap, engine upgrades, rear end upgrades. And I learned the hard way on this car: the bottleneck for the engine is the exhaust (because of the tight space in the firewall area and at the rear axle), which will limit RPM level the most.

The best bang for the buck setup without exhaust clearance issues on the MII with a 289/302 is the rotsun setup from roadkill: Thanks guys , good stuff
I love the Rotsun

LILCBRA said:
but what I found was that the auto car already had the reinforcing bracket spot welded in place.
Click to expand...

Yuppers, It looks like it. And it looks to clear the booster too. I bought my clutch cable recently from Amazon. It's Pioneer brand CA 305. It fits better then the stock one. Factory cable was tight against the master cylinder but the new one runs further into engine bay and has more room near the header.

I had to cut 2/3 of the spring off otherwise it fits perfect. As stated above. Leave that alone until you drive it. I originally figured I would want at least a 3.55 but now think the other way is better for this t5.
Reactions: 1 users
Show hidden low quality content
You must log in or register to reply here.