Opinion - What to do with this turbo?

I held back from saying anything about this until everything got settled. But as of last Friday, I got my money back and now have a S400 turbo sitting around that I have no clue what to do with.

I made the mistake of buying a professionally rebuilt "82MM S400 turbo with a 5" full marmon outlet and T6 Flange" from a pretty well known guy on the Coyote Swapped Foxbodies facebook page. It was a good deal and the guy used to be a moderator on the page with lots of history, so I thought this was good to go. Guy took over a month to ship after multiple contacts and when I received the turbo, it turned out to be a 63mm turbo off a D9 CAT motor with a T4 flange. Contacted the guy, he kept giving me some sob story about his buddy screwing him, acted like a typical millennial and wouldn't take responsibility for the botched sale (he already spent the money to buy a fairlane, dumbass), but was able to work out a repayment plan so I could return the turbo. Well repayment never happened and I started the refund process through Paypal immediately after our talk. Paypal ended up refunding me the full amount.

So what do I do with this bad boy? I'm not sure if I want to sell it since I don't know or necessarily trust the rebuild history after my experience, but it does seem to be a solid turbo. It's too small for my coyote motor goals but seems like it would make a great turbo for a diesel or 500-600HP goal gas motor. It's got the billet 63mm wheel and appears to be fully rebuilt (new bearings, new wheels, new wastegate, ect). If I do decide to sell, anybody know where I might be able to unload this thing? 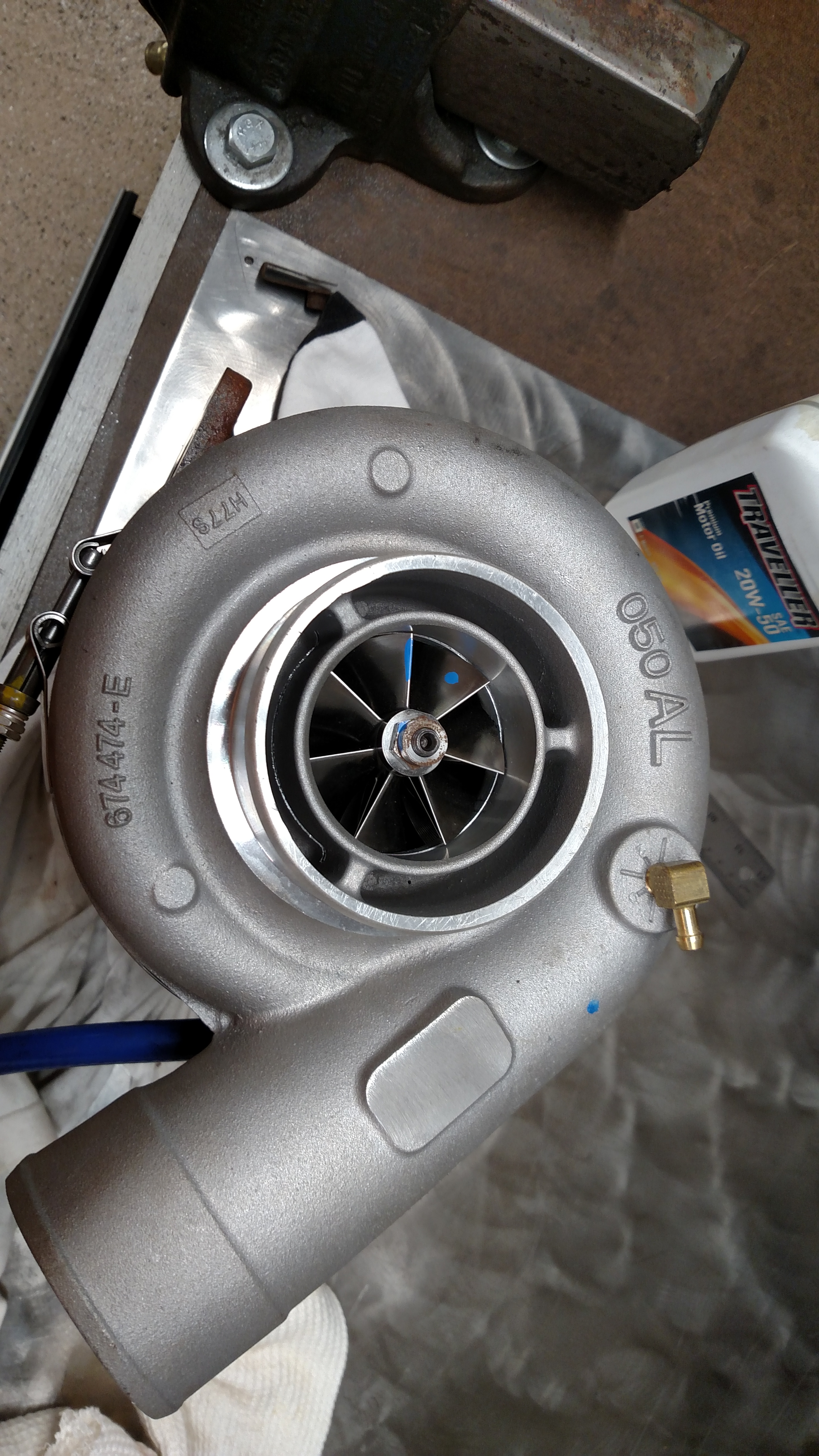 Could always put it in a calypso 4 banger...that's only a trip down 95 away.
Reactions: General karthief

Funny, that was the first thing I thought when I saw your post. I really don't need another project, I think........

I don't think the spool characteristics would be too friendly on a 4 cylinder.
Reactions: 90sickfox

Post it up on the Corral and Stangnet classifieds. Probably an OK turbo for a stock 5.0 with E7 heads

I looked up some info on the turbo forum. Apparently, a ranger 2.5 blocked turbo fox can reach over 400ft.lbs on around 18psi. Half the cost of a v8. Hmmm.

That's exactly why I think it would be neat to have a little turbo 4-banger stang. 300+ WHP and 400+ WTQ in a lighter, cheaper fox platform. Plus i'd be fun to embarrass some people with an 80's 4 cylinder "

Hoytster said:
That's exactly why I think it would be neat to have a little turbo 4-banger stang. 300+ WHP and 400+ WTQ in a lighter, cheaper fox platform. Plus i'd be fun to embarrass some people with an 80's 4 cylinder "

There is a ton of info on Stingers website about building monster Ford 4 cylinder turbo'd cars. There's some dude named Matt Culpepper that stick shifts his turbo 4 banger fox notchback in to the high 9's. It's crazy.
Reactions: Hoytster and 90sickfox

I'm pretty sure the tractor or maybe the truck pullers would pick this up in a heart beat. Probably the best free classified would be racingjunk or pulloff.com/classified.
Reactions: Hoytster

Don't kid yourselves. A turbocharged 2.3-2.5l four banger is the equivalent to a pissy little btch. The engine will only hit those numbers in a very narrow rpm band that will come and go equally quick.

How come you don't have to send it back to the original seller? PP doesn't require that as part of getting your money back for the item?
Reactions: 2000xp8

Oh I'd expect it to be really soft down low and down right violent for about 1500-2000 rpm. That's what would make it fun

Mustang5L5 said:
How come you don't have to send it back to the original seller? PP doesn't require that as part of getting your money back for the item?
Click to expand...

Seller hasn't contacted myself since October 27th and hasn't contacted PayPal at all since the claim was started a couple days beforehand. They consider this a forfeit on the sellers part. PayPal considers the case 100% closed at this point.

I could be a nice guy and offer the turbo back to the guy now (which I did multiple times for a refund), but i'm not going to since he dicked me around. I don't react well when someone screws me.
Reactions: RangerJoe, Mustang5L5, 90sickfox and 1 other person

Pass it on to a friend for free. Selling something you never landed up paying for might be bad karma.
It doesn't sound like the original seller deserves it back (he'd probably rip someone else off again).

Besides, installing it on something else you own (or don't own yet) will just turn into another money pit and it would seem you already have one of those.

I don't know enough about turbos to know what you could do with it, but I do know you don't start a car project with the base of it being the turbo and not the car itself.
Reactions: Essn95

Giveaway on the site maybe
Show hidden low quality content
You must log in or register to reply here.

Help me identify this turbo

C
New to the Fox game