Choppertwo said:
Hey Guys, I'm trying to listen to all sound clips , however None are coming up-- CHOP
Click to expand...

OK, today most of them are coming thru-- CHOP

OK so I know I'm a latecomer here but let me say this, you gotta just look for other V6's with modified exhaust and have them rev it up for you, the sound clips all will sound different depending on the audio equipment that they are replayed over, and you can't make a good decision based on that, as far as my opinion on the best sounding on a V6, I did what I suggested and actually would pull up next to other V6's that had exhaust different from stock and asked them to rev it up, so they would rev them up and I would tell them it sounds great { I believe if you can't say something nice don't say anything, and everyone is proud of there car, and its nice to hear a compliment every now and then} and ask what brand it was and then either cross it off the list or do more research, that is until I heard the MAC, I was sold and love them, however, they drone badly inside the car so if you think thats not acceptable I would tell you not to get them, I love them and just ignore the droning and turn the radio up just a little louder LOL, I've had them now for 5 or 6 years, and have no intention on changing.
I hope this helps, I know the pic there is of my II but I also have an 05 sonic blue V6 that I love, her name is actually Big Blue.

This is 'Little Red'. 2011 v6. I run a MPT ghost cam tune for a week or two per year just to change things up. Magnaflow Street axle backs with long tube headers
View: https://youtu.be/RbJXEhMfJRY

That video above sounds awesome. Wouldn't know it's a V-6 from that sound. Since I just got my Stang in November, I am looking at exhaust now. Thinking the Borla True Dual cat back. Any input on that system would be appreciated. Likely go high flow cats along with it. Who makes good high flow cats for the V-6 Stang?
Last edited: May 11, 2020

Thanks . You need a catback exhaust. You use your factory cats but they still cost a lot

I know I need a cat back. I was asking for input on the Borla True Dual catback. Anyone have it? Is it loud an obnoxious, a droner? I hate droning exhausts. The Borla in my Lightning is a great exhaust, not loud at all, and no drone. Heard a V-6 Mustang yesterday in town, it sounded horrible. Loud and obnoxious. Had to roll my windows up it was so loud.

Oh well, never mind. I see it is out of stock with no expectation of a date when they will be back in stock. That sucks. And one of the review write ups says the drone is terrible. So onward with the search. 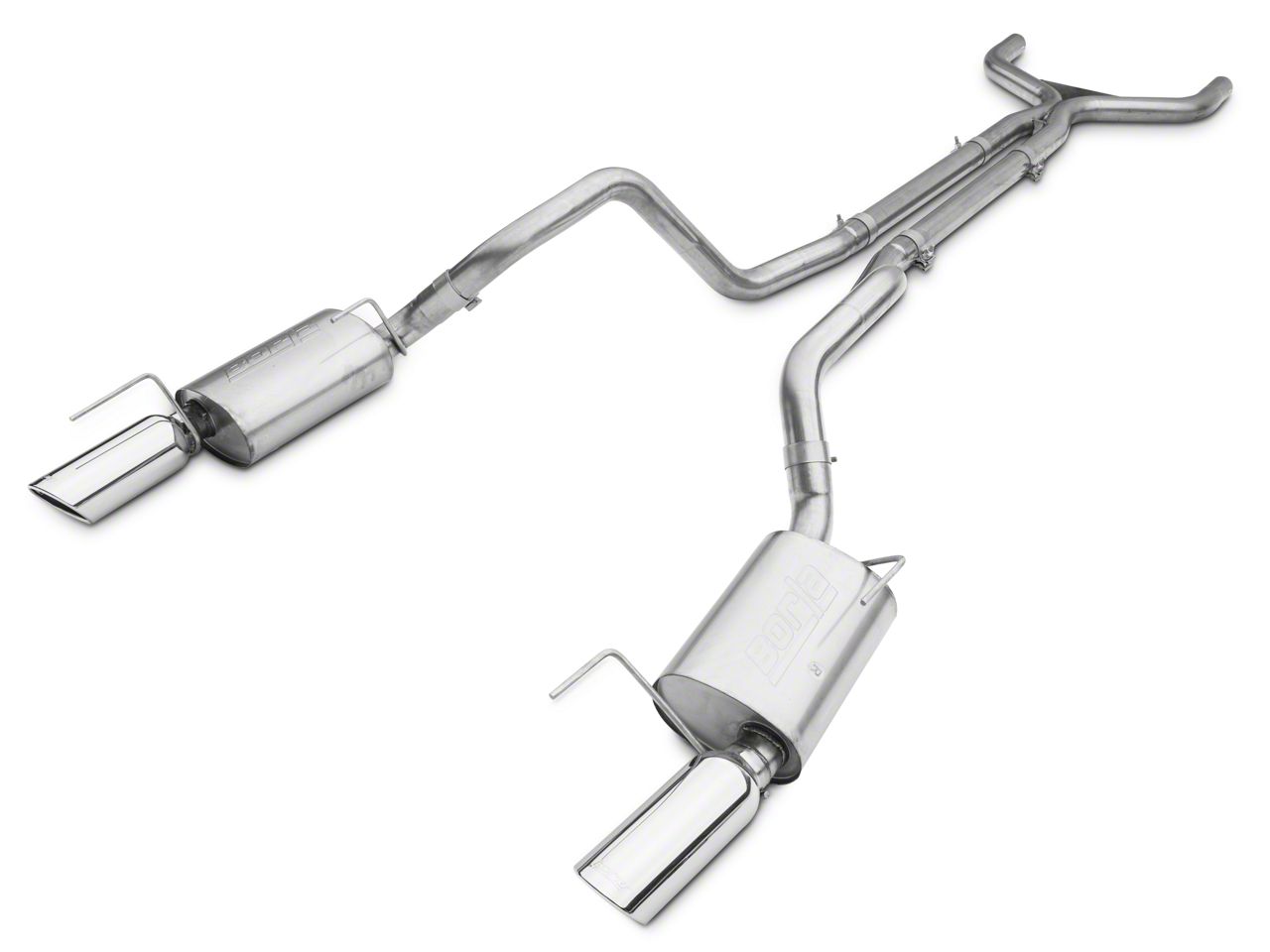 FREE SHIPPING! True Dual Exhaust. Now you can convert your S197 V6 Mustang to a true dual exhaust with a Borla Dual Cat-Back Conversion Kit. This kit includes b

Looking at the Flowmaster now. Appears to be about the only one in stock. LOL!! 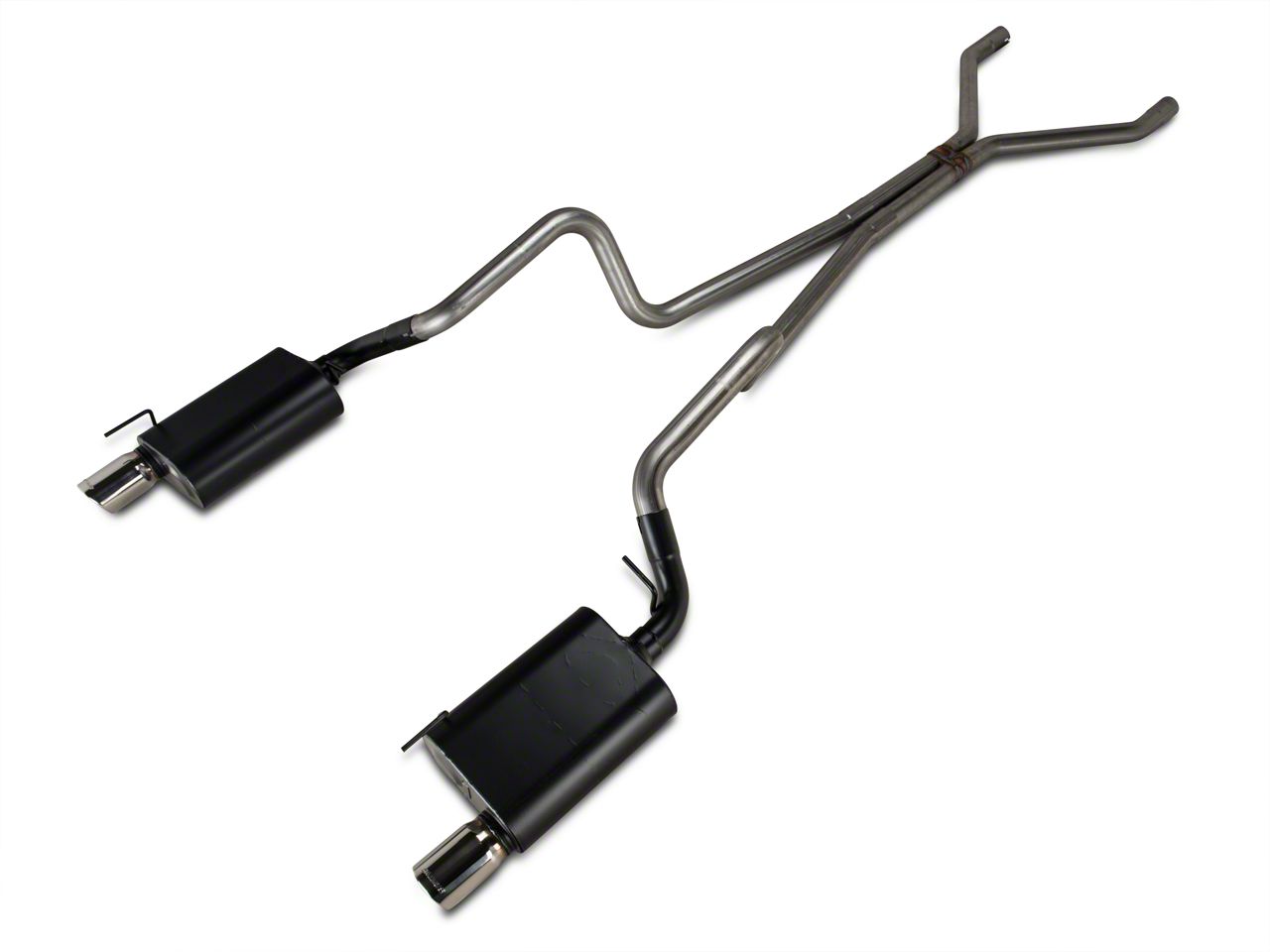 Looks like all of them cost a lot. I would check around for a local 'good' muffler shop and see what they come up with.

David Young said:
Looks like all of them cost a lot. I would check around for a local 'good' muffler shop and see what they come up with.
Click to expand...

Cost really isn't a problem with me. I'm single, live alone, have no debt. Rent and utilities. So the cost I see for them isn't all that much of an eye-opener.

But yeah, was thinking about the local muffler shop axle back route. My understanding is the V-6 really doesn't need a dual exhaust, and a single actually makes more power. The advantage to the dual is strictly sound, but expect to lose a few ponies with them.

cbxer55 said:
Cost really isn't a problem with me. I'm single, live alone, have no debt. Rent and utilities. So the cost I see for them isn't all that much of an eye-opener.

But yeah, was thinking about the local muffler shop axle back route. My understanding is the V-6 really doesn't need a dual exhaust, and a single actually makes more power. The advantage to the dual is strictly sound, but expect to lose a few ponies with them.
Click to expand...


All of the v6 Mustangs ever made should have had dual exhaust. I have seen a youtube video showing 4 or 5 horsepower loss when installing dual exhaust on the 4.0

It all looks fairly recent, not a lot of rust on any of it. Looks recently done and speaks of custom work. IMHO, three inch pipe should be plenty sufficient for a 240 cubic inch V-6.

Assuming this isn't the stock exhaust, I am going to go to my favorite muffler shop and have them replace the two three inch tips with four inch tips. That'll meet my needs just dandy. It sounds really good, so I am fairly certain it isn't stock. But yet it's not rip-roaring loud either, which is fine by me.

I was out doing the boulevard cruise scene this evening, the very boulevard I live on. Perfect! There were numerous Mustangs, Camachos, Challengers and Chargers with really grotesque exhausts. I don't know how they can like that barfing fart can sound. Whatever! Doesn't do a thing for me. Heard a V6 Mustang recently that sounded flat-out horrible.
Show hidden low quality content
You must log in or register to reply here.

Bolt on exhaust system with factory manifolds and cats.