In general:
If you use chambered mufflers (compared to absorbtion mufflers) they will be more loud with low massflow (low RPM, low load), they will be more quite (compared to absorbtion mufflers) at high massflow (high load, high RPM). From sound: chambered mufflers have normally one frequency range where the dampen more than in other frequencies (this depends extremely on the internals). The absorption mufflers don't filter low frequencies and start to dampen in mid range frequency and start than to dampen more with higher frequency.
I don't know how much space there is with you current exhaust routing, but some additional glasspacks could help (use the thrush). It will also smoothen the exhaust tone, I'm not sure if you will like that.
That is just the exhaust tone and loudness.

The dumped exhaust will lead IMO to excitation of the body in this area around the tail pipe. dampening material (with high mass and alu finisihng surface) om the body will help to prevent the boom noise. I would but this staff on under the rear seat bank and under the trunk carpet.

Can you tell if it is only at some RPMs when it is to loud?!

Oh, it's all the time. And it's because I have dumps, but I really have nowhere to route a tailpipe with a Fox fuel tank. I've toyed with the idea of adding short glass packs but wonder how it would affect the tone. I know they'd help quiet it down though, just never jumped in. I mean I like how it sounds, just not the volume, especially on longer drives. I don't mind it so much on short drives. It's easy to drop the exhaust if anyone didn't notice, that might be my next mini-project.

Yeah, I wasn't expecting to see it, but then again it's been 10+ years since I've had the bodywork done and painted. It's due for a redeux....

I personally would do that to get it more quite. If it is all the time and it isn't a boom noise I wouldn't start to mess with additional hangers, but this can help extremly in some cases...
Let's see what your carb tuning does. I have tow options for my car, also an holley 650 DP or a 4180.
Reactions: LILCBRA

Ok, I bit the bullet since I have the car on jack stands and the exhaust is half off anyway. Going to be installing a pair of these this weekend, we'll find out the difference when I get it back together. 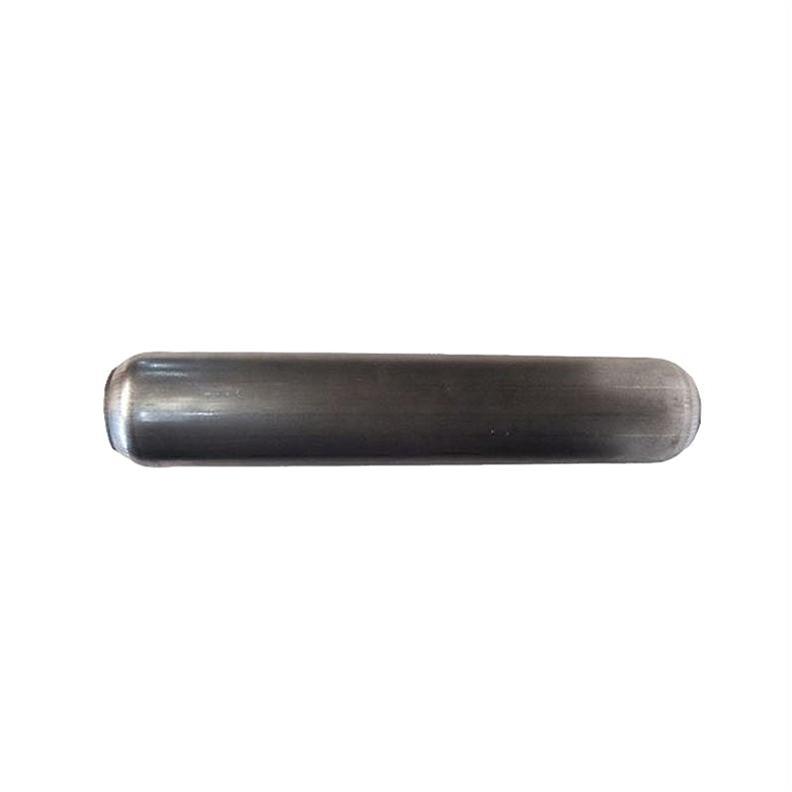 Find Jones Exhaust Glasspack Mufflers A3516B-8 and get Free Shipping on Orders Over $99 at Summit Racing! Jones Exhaust glasspack mufflers are designed with the highest quality materials to industry high standards. Each aluminized muffler gives you the option of choosing standard flow or...

Short little bastrads aren't they?
So 4 mufflers on a II? gonna be tight I figured I'm going to cut the pipes around the area I cut them previously and used a connector to reweld them, so the new glass packs are going to replace the connector right after the H pipe. The new mufflers shouldn't hang much lower than anything else since they're only 1 inch larger in diameter than my pipes. Hopefully it all works the way I envision in my mind....

Ive been imagining this same thing for my other mustang

2Blue2 said:
Remember to flatten em out a little on a speed bump afterwards cuze thats what I do

Oh, it's BOUND to happen at some point!!

My car sit's pretty low as it is now, luckily I've not had too many problems with clearance most anywhere. But then again I don't drive it around too many speed bumps......

I thought about going for the Summit branded 12 inch glass packs, but figured these would serve the purpose at 16". I also figured the extra length would help quiet it down a little bit more - it probably wouldn't be a noticeable amount of difference if I could compare them, but these were like $1 cheaper. Every little bit counts, right?? I'm stingy like that.....

So these are louvered glass packs, I ended up installing them with the open side facing the headers since that offers the most noise cancelling. I really hope I like how it sounds when it's all said and done, but I have no doubt it'll be quieter. Your Carb on Holley's site lists stock jetting as 67 main 73 secondary, with a 6.5 power valve.
Is your car a stick or auto?

It's a 5 speed, and the jet sizes I posted earlier were what that guide said. I have a Holley book SOMEWHERE, but can't find it. It probably got lost in a move or my ex threw it out or who knows what else. But anyway, I took it back to those sizes today just to throw the carb back on the car to hear the change in the exhaust. I'm still waiting on the power valve before I get hot and heavy with the carb AND I still have to finish the gauge install. But here's what it sounds like now. I couldn't figure out how to prop my phone anywhere for me to blip the throttle, but it's a little quieter. We'll see what difference it makes once I get it all back together and start messing with the carburetor.

Did you test the power valve function? Maybe you had a blown power valve, that will make your car run pig rich. Power valves are easy to check with the engine running.
E

429MII said:
Did you test the power valve function? Maybe you had a blown power valve, that will make your car run pig rich. Power valves are easy to check with the engine running.
Click to expand...

No, I've not checked it. It very well could be the power valve, but it would've had to have been faulty to begin with as it was fairly new. I've ordered a 4.5 now with the amount of idle vacuum I have that's where I believe it should be. Once the A/F gauge is up and going I'll really dig into the carb and get it dialed in. The pv is supposed to be here on Thursday, so that will be next weekend's project.

In other news, I took a nap..... Wait, that's not what we're talking about here!
I got the gauges mounted in the pod and on the dash. Tomorrow will be connecting everything and finish wiring it up. I might even get a test drive in to note the initial A/F numbers. So tune in tomorrow, same bat time, same bat channel!! It's been a little bit since I set the timing, but I believe it's around 12*. I honestly don't remember the advance curve at all off the top of my head, I'd have to recheck all of that. Once I get out there and connect the gauges I'm going to triple check and confirm the vacuum reading again when I check that the A/F gauge is working, I can get the timing light out and double check all of that too. As far as the vacuum goes, I was looking for my cam specs but can't seem to locate them right now. I believe my Cam's LSA is around 110, but I can't say that's fact atm.
Reactions: 2Blue2 and extra_stout
E

If you have only 20° of mechanical advance (what aftermarket distributor often have) I would for 14-15° initial timing.
Reactions: 2Blue2

Continued to let the car idle and adjusted the idle mixture 1/4 turn at a time. Final results were about 3/4 turn in, idle is now at around 800, A/F gauge reads 13.8-14.3. a touch rich, but a lot closer to stoichiometric.

Adjusted idle speed to around 7-750 RPM. Vacuum now reads around 15. I believe I need a LARGER power valve, not a 4.5 as I was thinking.... I think I still have the 6.5 around somewhere, if not I'll have to order ANOTHER power valve.

BUT - I then noticed that my fan hasn't kicked on. I have one of the thermometer type radiator caps and saw that the radiator temperature was reaching 240+ whereas the temperature gauge in the car was still reading 190ish. So I shut everything down and will have to go through this all again. So far though, I REALLY like the gauge!! If you haven't gotten one, I HIGHLY suggest it! I'll update this as I continue tuning later.

One thing I forgot to do is check my initial timing and the timing curve I set the MSD mechanical advance distributor to. I'll try to remember that when I go back out there. Another thing I noticed is that my oil leak IS the front seal, not the damper, so I'll have to try to address that too.....
Reactions: 2Blue2 and extra_stout
Show hidden low quality content
You must log in or register to reply here.

Anyone install their own supercharger?