Engine Anyone have trouble seating a new timing chain sprocket?

I'm doing an R-134a/serpentine/3G all-in-one upgrade on my 1985 F-150. While I had the timing cover off, I noticed that the old timing chain had a lot of slop. I had a new Cloyes 9-1138 Street True Roller timing set that I had bought for another engine that I decided to throw in to remedy the issue.

Installing the new timing chain (straight up, 0° retard or advance) proved to be a little difficult. I was able to get it to slide onto the crankshaft about 1/8" at a time. Once I was satisfied that it was completely seated, I took a look at it from the side. It was difficult to see if it was 100% straight. It looked like it might not be, but it could have been my eyes playing tricks on me.

Fast forward to installing the balancer, and it feels like it should have set onto the crank further. Using the timing pointer as a reference, it looks like it might still need to go in another eighth of an inch or so. It's difficult to tell since I'm using the pointer on my '95 Cobra as a reference. Who knows if the pointers are even identical enough to use it as a reference.

Assuming they're identical, there is a slight difference in the distance of the tip of the pointer circle from the face of the balancer.

First picture is of the balancer on the truck, second is on the Cobra. 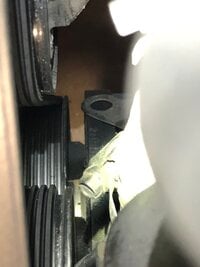 I know the Cobra has a completely different timing cover, so measuring from the balancer to it won't help. That said, I did measure from the face of the balancer to the front of the cover where the part number is cast into it. I came up with 2 1/8". Does anyone have a similar engine they could measure to corroborate this? 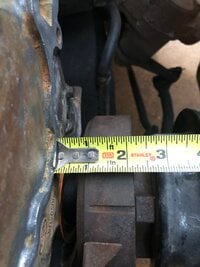 Has anyone ever had any issues with installing a Cloyes 9-1138 timing set on a 302? I noticed that the new camshaft sprocket has a Ford part number cast into it. I'm assuming this timing set, with the probable exception of the crank sprocket, was also used as original equipment on 302s equipped from the factory with a double-roller timing chain?

I want to figure this out before I press on with the rest of the conversion. Thanks in advance for any help y'all can offer.

I’ll add that there doesn’t appear to be any clean metal on the balancer protruding from under the front seal. 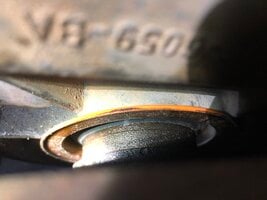 Thanks for the pictures!

I think it may be fine. Today I test fit the passenger side bracket that mounts the alternator. I eyeballed the pulleys from the side and everything looked like it was aligned just about perfectly.

I've actually never messed with a timing chain on an engine that I didn't intend to completely disassemble. I'm glad I replaced the timing set, though. The original was a single roller with the plastic cam gear teeth.
Reactions: 1 user
Show hidden low quality content
You must log in or register to reply here.

Engine removed timming chain put back a new one now i lost power?

What does the diffent keyways on timming chain do?