To say this is going smoothly would be the understatement of the year, or maybe decade. So we bought the bushing uninstall tool and removed the stock upper control arm bushings from our '90 Mustang rear. That went fairly smoothly. Bought 2 new stock bushings and melted the rubber center out of them and then cleaned up the metal sleeves for re-use with the Prothane Poly bushings. That also went smoothly - other than a 3rd degree burn when the melted rubber bushing hit me on the wrist on its way out.
Now is where it gets interesting. We pressed the new red, Prothane Poly bushing into the first cleaned up metal sleeve and then pressed it back into the rear. The upper control arm will NOT go over the bushing - it's a two part bushing with a bevelled donut shaped piece that goes over the end of the main bushing/metal sleeve on the end opposite the flange and ends up being flush with the end of the main bushing body. After a lot of head scratching, I took some measurements and found the following:
Uninstalled bushing length - 2.404";
Distance between the two arms of the upper control arm - 2.409"
Installed length of the bushing - 2.510"!
So pressing the bushing into the metal sleeve caused it to grow in length by over 0.100". Has anyone experienced this? If yes, what did you do? I'm inclined to pull the bushing and grind off the excess poly so that it will fit, but my partner doesn't like this approach. Any thoughts or solutions would be GREATLY appreciated!

A lathe would be better,but yes you need to get the bushing material flush with the inner sleeve.The same thing happens with the front control arm bushes,they need to be trimmed to eliminate any binding.
J

OldManRiver said:
A lathe would be better,but yes you need to get the bushing material flush with the inner sleeve.The same thing happens with the front control arm bushes,they need to be trimmed to eliminate any binding.
Click to expand...

Thanks OldManRiver! I really appreciate the quick feedback.

When I changed my rear axle bushing to a Prothane unit I burned the old rubber out and then moved the sleeve (still in the rear end) the thickness of the flange on the poly bushing. I grabbed this image from the Mathis book. Ignore the dimension for now. This is basically the stock rear axle bushing location. If you put a poly bushing in (that is flanged - like my Prothane unit was) you need to move the metal sleeve inward to put the inner metal tube the bolt rides in, in the correct location. In essence you need the dimension shown AFTER the bushing is installed and adjust the steel sleeve as needed.
J

Thanx KRUISR. So if I understand this, the face of the rear casting that houses the sleeve needs to be 0.300" from the inside face of the metal sleeve flange when the bushing is installed?

That would be the stock dimension. I moved the flange inward the thickness of the shoulder on the poly bushing. My control arms lined right up without the need of side force to get them on. 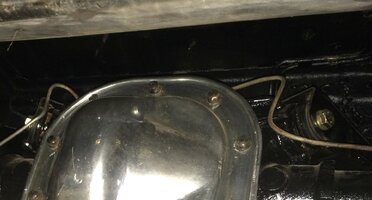 If you look close you can see how tight the metal sleeve is to the casting on my rear. If looking here, you have the axle casting in black on the right, then a short piece of metal sleeve followed by the flange in black, followed by the poly bushing flange in satin and then the factory control arm. I didn't need to move it much but I did move it (2x4 on the face and big hammer). When aligned right the upper arm basically lined up above it and slid straight down.
J

OK KRUIZR. Very helpful. Thanks. Last question. When you inserted your poly bushings into the metal sleeves, did you have any issues with the poly bushings "growing" in length? My theory is that either the ID of the sleeve is slightly too small for the bushing, or the bushing OD is slightly too large for the sleeve ID. And the end result is that the plastic has to go somewhere so it extrudes and lengthens. Mine grew 0.106" which then does not allow the upper arm to slide over it. As you can see, the metal center piece is recessed at the flange end of the bushing by about 1/10" while the opposite end is flush with the poly. Another response suggested pushing the metal center piece flush with the flange end of the poly and then milling off the other end of the plastic so it is flush with the metal insert. I think I may try that.

I don't see the poly material "growing", its too rigid. I don't remember the details of my install completely (it was 5 years ago). Did or does the bushing fit in the control arms when not installed on the rear end? The metal center bolt sleeve should not be on issue if slightly recessed, so long as the control arm fits on.
J

KRUISR said:
I don't see the poly material "growing", its too rigid. I don't remember the details of my install completely (it was 5 years ago). Did or does the bushing fit in the control arms when not installed on the rear end? The metal center bolt sleeve should not be on issue if slightly recessed, so long as the control arm fits on.
Click to expand...

Hi KRUIZR, No the control arm will not go over the bushing installed or not. If you check the photos above. The poly bushing and the center steel sleeve start out at exactly the same length 2.406". After pressing the bushing into the the outer sleeve the bushing measures 2.512". You can see the difference on the flanged end of the bushing where the center steel sleeve is now recessed into the flange of the bushing by over 0.100". I built a jig to hold the bushings while I milled off the poly from the non flange end with a router. Router made a perfectly flat face and I now have a nice snug fit in the control arm.
Reactions: 1 users
Show hidden low quality content
You must log in or register to reply here.