Boostedpimp said:
Is it the window stop? 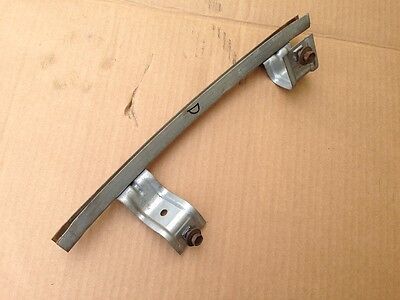 Up for sale is a drivers side OEM door window guide U bracket. This is basically the bar that guides the door glass up and down inside the door itself and usually has a small weatherstrip inside of it.
www.ebay.com
Click to expand...

From what I can tell it is just a bar and bolt, it doesn't look like it's attached to a bigger piece. It presses on the window near the lock to keep the right tension so the window doesn't flop around. My driver-side window pops out at the top and doesn't roll up properly.

So after 2 days of digging, I finally found it! For future reference, it is called STABILIZER-FRONT DOOR WINDOW GLASS INNER part number is D9ZZ6622380A. The only place I could find it was from NOS Parts.

Nice thanks for updating the thread with what it actually is called and part number.

Since people are replying to this thread and I don't want to start a new one... Got a couple more questions.

1) I replaced the coolant temp sending unit, the previous owner had an aftermarket gauge in there. the new stock sending unit isn't going all the way to the end of the threads. I tightened it down as far as it will go but there is still about 1/8" of thread showing. Is this normal? I don't want to strip the block.

2) Previous owner started deleting the charcoal canister. I pulled the vac line going to the upper intake manifold and the nipple (whatever it's called on the actual manifold that the vacuum line connects to) came off with it. It seems to just pop right back in. I didn't know if these were supposed to be welded on or not. I was just going to put a cap on the end of the nipple. Is that normal or do I have to take the manifold off and look closer at what is going on under there?

Update on the window thing, that part number seems to be for the passenger side. All good though did some fabrication and got it to work. Unfortunately, the window still won't roll up correctly. Next month will be replacing the motor and the run channel to see if that works. It seems to bind by the mirror and then flops out at the top in the rear. Any suggestions on that would be great too! I already replace the bushing and tried to realign the window multiple times.

#1 I believe the stock sender will not screw to the shoulder, I'll look at mine later.
#2 are you hooking up the charcoal canister like it is supposed to be?
Should really pop the upper off and fix the nipple, it should be a press in fit, a little rtv and a couple light taps with a brass hammer should seat it .
WWGCD and in no way responsible for damage to random parts and/or appendages.

General karthief said:
#1 I believe the stock sender will not screw to the shoulder, I'll look at mine later.
#2 are you hooking up the charcoal canister like it is supposed to be?
Should really pop the upper off and fix the nipple, it should be a press in fit, a little rtv and a couple light taps with a brass hammer should seat it .
WWGCD and in no way responsible for damage to random parts and/or appendages.
Click to expand...

Thanks. I finally found a picture with a good angle for the sender and it doesn’t sit flush. The one that was on there had an adapter that did sit flush and that’s why I can concerned.

I am trying to clean up the engine bay a bit and the other guy still had the vacuum tube on the intake manifold and just zip tied a bold in it. The hose was dry rotted and cracked in places so I figured it was a matter of time before I had a vacuum leak. I took the hose off and the nipple came off the manifold with it. I put a cap on the nipple (no unsightly bolt and vacuum hose) and popped the nipple back in as good as I could. I can take a punch and a brass hammer to it tomorrow, but I’ll see how she runs first.
Show hidden low quality content
You must log in or register to reply here.