So recently just got back from vacation and went to start up my car to let it run for a little. When I went to start it up the battery was dead, so I swapped it out with one that should be charged. When I hooked up the battery, some more sparks flew than usual (probably just me being stupid) and I noticed that the fuel pump started to make a priming sound but it didnt stop. Also, the 20 gauge wire connecting to the black and orange tracer wire started burning up. This happens every time I connect the battery. there is no key in the ignition or anything. I dont know if its a relay or ground somewhere, Im kinda new to the electrical side of things. Any solutions?

In Remembrance. Thank you for your contributions

Did you connect the battery properly? Red wire goes to positive, black wire goes to negative, and is bolted to the body by the windshield washer filler neck...

The battery common ground is a 10 gauge pigtail with the computer ground attached to it.
Picture courtesy timewarped1972

Check the fuel pump relay. Maybe the power side failed in a closed state (runs all the time). It would explain the dead battery and the sparks when connecting new battery and fuel pump starting.

If the relay, unplugging should stop the fuel pump.

Depending on year it will be either under driver seat (1990 and older I think) or passenger side in front of shock tower under the MAF (91-93).

Was the ignition switch in the off position when you disconnected and reconnected a battery? If it was left in the on position while changing battery, damage to the ECU can happen. A faulty ECU can make the fuel pump prime continuously.

Same thing happened to me when I first started to get my car running. It was a "car port" find and hadn't been run since 2011. Long story. My fuel pump ran continuously. Car would run but really rich. Through testing and a lot of reading on line, I discovered that: when the ecc's get old, sometimes the capacitors start to leak, there are three inside the computer. One of them does the fuel. I also check the ground trace in the computer and found it bad. I bought an original computer, but you can buy new ones or have yours rebuilt. After install everything worked. Pump primed and then shut off like it was suppose to. A way to check this is, pull the computer, take it out of the case and check the capacitors, If they appear to be leaking, they are bad. Good luck.

From my experience, the ECM's for Foxbody are no longer available from parts stores. You can by used from Ebay but they are getting pricey, in the $300 to $400 range. And if you buy used you might get one that's not all good. It looks like the best way to approach the bad ECM issues to either try and repair them yourself, or, ship them off to a vendor which either swaps you with a replacement or repairs yours and returns it to you.

I had some recent issues with my ECM on my 92. It wouldn't start and the pump prime ran continuously. It's capacitors were bad. You could clearly see that upon visual inspection. I replaced them myself and I think I did a clean job of it. However, it did not solve the problem so I assume there was additional things wrong with that ECM, or maybe one of the replacement capacitors were bad. Anyway, I sent it to a vendor and they sent me a replacement which solved the problem. Cost about $100

I have a thread of my own on this issue somewhere on here and I plan to update it. I'm waiting for the delivery of another ECM which is for my 93 vert. That car was running fine but I figured I would visually inspect the ECM caps. They were leaking, corroded and one had a broken leg. Clearly, that ECM would have eventually failed, probably sooner rather than later. Considering you cant just go to the parts store and grab a replacement anymore, a failed ECM can leave you stranded and in need of a tow truck. Not something I want happening when I'm 150 miles from home on a weekend road trip. Not only am I refreshing the ECM's in both cars, I'm also planning on refreshing a spare ECM that I have. It will be carried along on longer trips.
Last edited: Jan 19, 2020

I have a spare also. Where did you send it for repair for $100? It is always good to have an extra one.

Here’s the vendor I used 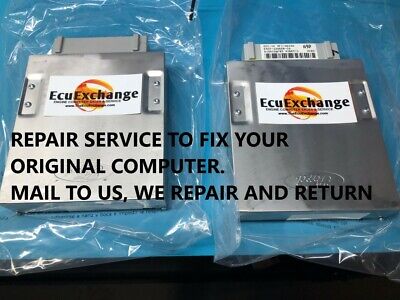 Mustang ECU Repair Service. Quick turn around after the computer is received. Easy repair process. If we are unable to repair your computer, WE CAN HELP! 1986 to 1995 Models. Acworth, GA 30102. 6350 Kemp Dr.
rover.ebay.com

Thanks for the quick reply. The one that came with my car was a Remfg, E9AF. It was in my 92 LX convertible, 5.0. I think I will have it refurbished just for the heck of it. The one I have in there now is a A9L.
Thanks again.
Reactions: 1 user
Show hidden low quality content
You must log in or register to reply here.

Electrical No start sometimes…..fuel pump not priming unless I tap FP relay