I'm new to this forum and have a few questions about my forth coming project.
I've owned this car since '91 and has been unofficially stored for many years sometimes in less than favourable conditions.
Aside from tons of scale and really rusty bolts, things are going pretty good.
The car is in decent enough overall condition for a 30+ year old Ontario Fox body.
I've got to remove the engine to get to the frame rails under the K-member.
I've got most of the engine prepped for removal but I'm having a hell of a time with one of the fuel lines.
I've pretty much got to replace the fuel lines (and brake lines) so would I have an issue just cutting the line?
I've still got loads of fuel in the tank too.
(Engine and fuel was all changed and stabilized before it sat.)

My goal is to remove the K-member and fix the rails and install a tubular K-member with coil overs on the front and hopefully eventually IRS.

I have nothing but time so I'm in no hurry but any tips from anyone who's removed 5.0's from Foxes including all the bolts and sequences of removal.

I've searched the forum for a similar answer to my questions but no luck.
Cheers,
R

Where are you trying to separate the lines, at the fuel rail?

Thanks for the chime in General!

There is a pair of connectors behind the 'air pump' that go to a vertical run to the fuel rails where I see two more connectors.
For now I just want the motor out but I do not want to sacrifice stuff I don't need to or that would cause way more work.
The lines back to the tank is pretty scabby so I'll replace that.
I did get one of them released after much fuss, but the other one just won't give it up.
The smaller, inside one just won't release.
Where can I cut? (no sparks cutting obvs)

I'm also assessing the harness for the injectors.... looks like the intake plenum is coming off.... can you confirm?
what's best, all 8 injectors or the two massive connectors behind the plenum (that won't budge)?

Welllll I may be a little different doing things than the average experienced shade tree mechanic. I pull the upper, and take the black & white connectors apart, I also take everything off the front of the engine.
As for the fuel line connector, spray pb blaster in where the spring resides and keep trying, take the nut off the head where the bracket is or pry the lines off the bracket so you can kinda twist as you pull apart, they have been there a long time and can be stubborn.
Reactions: 1 user

Id keep trying with the ac connector renoval tool. Spray some penetrant up there and keep working it. If you plan on replacing the lines from the tank to the front, just cut them with a sharp razor on the rubber flex portion and work on freeing the connections on a bench.

depress the schrader valve to relieve pressure but if the cars been sitting years you shouldn’t have any. You’ll get fuel spillage as what’s in the lines drains out
Reactions: 1 user

I'll give it a shot again this evening and try again tomorrow.
I've got most everything except the plenum off the motor now.

Those black and white connectors are hard and not easy to come apart, I hope it will be easier to access them once the plenum is off. Any tips for separating those connectors?? I really don't want to snap one or more.

I do have the factory engine lift hooks still on the header bolts so I might try to leave the headers on for now....?

I plan to replace the headers and get the engine cleaned up professionally (227K) while I undertake the K-member job.

Starter have to come out? Any hidden bolts around the clutch housing to block?

I'm close to figuring most of this out but working solo between long hours at work is making the task soak up valuable bodywork time and any tips are appreciated.

usually I’d say cut the h pipe, but if it’s a stock pipe those do have value these days. If you aren’t pulling the trans, you can unbolt the headers and pry from engine slightly and lift straight up. I usually run my lift chain from one head to the other. The lift plates aren’t needed so don’t struggle to keep them.

looks like you havethe injector harness extension. You’ll have two white connectors and two black. Those are typically removed as they cause problem, so you only need to undo one for now. most of the retaining clips will break. 30 year old plastic in an engine bay is brittle like that.

that frame rail doesn’t look too bad. Depending on what the inside looks like it could be an easy patch job.
Reactions: 1 user

Thanks for the tips!
Yes I'm hoping that after all of this prep work I do find something to work with.
Double edged sword keeping a car for so many years without doing proper storage work. (
Would hate to find a reason to abandon the project after the years of moving the car around to keep it.
I was wondering about those extra connectors on the injector harness. Perhaps it gives me some spares as I will probably break one.

I'll keep a post rolling on my progress hopefully you can continue to offer tips as I slowly return my beast to service.

OK I got the fuel connector off at the intake connector for the other line.

Moving on to the plenum and harness removal.
Thanks for the motivation if nothing else and the tips of course.
Reactions: 1 user

I used a small screwdriver to raise the one side of the black/white connector clips (once you get it under the clip it will stay put) then I just raised the other side with my hand and worked it off.

Starting to remember why I shelved this project lol.

The frustrating news:
I can not get to the 2 bolts under the 5.0 badge on the plenum as 1 torx bolt came out and 3 broke and/or twisted my entire collection of that size of torx bit.
It's Canada day and everything is closed in Canada.

I will finish up today doing my best to undo remove everything else holding the motor in. 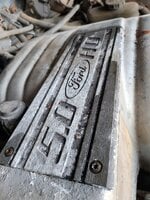 Hit those torx with a little bit of heat and they'll come right out.

Common problem, for future assembly use anti seize on any steel bolts that screw into or pass through aluminum especially when coolant is passing through.
electrolysis is a btch
Blaster soak overnight then use a torx bit clamped in a vice grip and tap it with a hammer as you wiggle it back an forth.
Or drill out the top of the bolt.
Reactions: 1 user

I have used 3-in-1 which has to date never failed me. I have used gunk and now WDforty. Will let them play nicely together overnight.

I have used a torch and then torch and icecube alternating.
I have used an impact, a ratchet.
I have tried all of my allen keys.
I have hammer tapped.
I have broken 7 torx bits now.
I now need more.

I will stop tomorrow at princess auto after work and get some hardened impact ones and also an allen wrench style one.

Backstory:
Years ago my waterpump gasket failed snowballing into a 3 month car-off-road disaster.
Long bolt broke off flush with the housing as I was reassembling the front cover. I put an extractor into it and it broke off, I was able to remove the pump and after getting vicegrips on the remaining bolt it broke off again but flush with the block this time and of course I broke another extractor in it.
I had to dremmell out the hardened extractor nipple tip for what seemed weeks to get to soft metal and I eventually managed to end-weld a rod to the bolt and remove it with vicegrips again. about 25 drill bits died so I bought the dremmell.
ALWAYS ASSEMBLE YOUR PROJECT CAR WITH NEW FASTENERS!!

If I can't get these torx out, I'll be dusting off the dremmell.

It's always something insanely small that can stop the process.
Anyhow more to come.

If you have to resort to the Dremel, try slicing a line across the top of the screw head and then use a flat head screwdriver on it.
Reactions: 1 user

OK I guess it's Dremel time.
Stopped in on the way home bought a hardened torx and snapped it off first try one handed.
that's 8. This car is a vortex for busting tools.
Show hidden low quality content
You must log in or register to reply here.

S
Stumble, Cough, Backfire and That Wrapped It Up!

B
Dust Shields or no Dust shields.