Rdub6 said:
@JKWilson61 sent me some hardware at one point. And once I get this rear end sorted out, I’ll have plenty of stuff to pay it forward I hope.
This site has been awesome with help, info, humor..... whatever you need, it’s here!
Click to expand...

Thanks for the shout out Rdub. Always happy to help out if I can and I know I'm not the only one here willing to do that.

Now...back to Mustang5L5 and your regular programing!

Never posted this but ended up scoring a very clean servo/amp setup from a 1993. It’s mounted on the car. Just need to do tthe underdash work and I’m done.

very easy to do with no fenders on the car. I guess my cruise control pieces from my ‘86 do have some value.

Everything from a fox has value to someone.

I’ve been slowly eBaying off some of my misc obscure items and you’d be surprised what sells.
Reactions: a91what and General karthief

T5 is in. I’m getting too old for this

. Time to convince the wife it’s time to buy a house with a big eboigh garage to install a lift. Stifflers X-member in, although I need to send an email on the spacer stack if using the stock exhaust hanger. Their instructions and photos don’t use it T5 is in. I’m getting too old for this

. Time to convince the wife it’s time to buy a house with a big eboigh garage to install a lift.

Stifflers X-member in, although I need to send an email on the spacer stack if using the stock exhaust hanger. Their instructions and photos don’t use it

I used the stock hanger with my Stifflers. I’m pretty sure I set it up like you have it, and it worked out ok. I’ll take a look when I get home.
Surprised you didn’t clean and paint that hanger.

Rdub6 said:
Surprised you didn’t clean and paint that hanger.

I gotta draw the line somewhere...

OldManRiver said:
I thought the instructions stated to use one spacer with the T5,but not having the instructions in front of I might be blowing smoke.That said I only used one spacer on my T5 install and measured 4 deg at the balancer.
Click to expand...

depends on what mount you use, but with poly mount and no driveshaft safety loop it says to run 2 Mustang5L5 said:
depends on what mount you use, but with poly mount and no driveshaft safety loop it says to run 2

Just checked mine, and I have the two spacers.

Stifflers got back to me.

Two spacers with the exhaust hanger is fine, but they suggested I measure the driveline angles.

Got the rest of my Cruise parts todsy. Just need to install these and that’s it.

Column harness thanks to @General karthief This is going to be the tricky part. This slips over the brake pedal and depresses the vacuum dump plunger. Since I have the MM hydroboost pedal, it needs to be redesigned. I’ll likely have to 3D print one also, I scored this NOS set of ‘86 Taurus cruise buttons. They are the same as the mustamg except they were mounted horizontal. I was thinking this might look better, but upon mock-up, the mustamg buttons look “right”. I bought these first....but USPS is slooooooow. So my $13 EBay frequency generator showed up. Figured I’d try calibrating the tach.

this is a spare tach I decided to play with. Here are my set values So this tach was off initially by 400 RPM at 5k. I adjusted the pot, but the upper rpm range is waaaay off.

If I adjust for accuracy at the top end, it’s off at the bottom. My 88 tach only has one adjustmrnt pots. I know 90+ has two. I wonder if I can swap in just the electronics from a 90+ tach in. I have two other tachs I can check. I’m curious if they are all as bad.

at least now I know I can do it.

Here’s what I bought. Might be able to find one on Amazon. I wish I had an O-silly-scope to verify accuracy

I have a steering column in the stash that has horizontal buttons, thought it was for a mustang

but I don't remember where it can from. 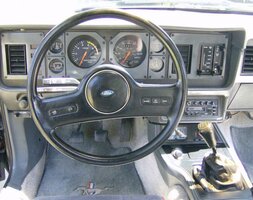 So, played around with this a bit. Decided to test all 4 tachs I have and see how they differ.

The 4 clusters I have are
Original to my car white face 140MPH
A good spare 140MPH original cluster
My 160MPH cluster
A junk parts cluster. This one I played around with the pot a bit to adjust

Here's how it plots out. The RED line is the standard set value for the RPM. Closer to the red line, the better.

As you can see, the junk tach that I played with last night is the closest after tweaking the pot a little. The 160MPH and 140MPH cluster were pretty even. The surprise was the white face cluster. This is the cluster that's been in my car since 1988 and the one i've been staring at for 20+ years. It's off. WAAAAY off. It's one of the reasons I installed the Autometer shift light you might have seen in earlier posts. The shift light would go off at 5400RPM and my tach would be showing almost 7K.

I've also discovered the tach in my 160MPH cluster is a late 1989 tach with 2pots for adjustment. The earlier 87-early 89 tachs only have a single pot. My next step is to get that tach (blue line) as close to the red line as i can.

Anyway, too much geek stuff i guess but i ripped the shift light out, so i want to get the stock tach as accurate as i can in the 5000-6000 range.
Reactions: Boostedpimp

And after adjusting the 2-pot tach

Blue original, green as left. Red is the target