Nothing at all changed. Stayed the same. Was it supposed to get worse? Showing it works?

How is the air filter mounted? Pics?

General karthief said:
How is the air filter mounted? Pics?
Click to expand...

Bear in mind the iac is still flipped here.

IAC or maf? Looks like the maf is upside down, oh, and the filter on the maf is bad juju, turbulence jumbles the maf readings, needs at least 6" +- between the maf and filter, I was told this years ago by the people that sold me my maf, it can be clocked to get a better sensor reading, you're also getting heated air, not fresh, cooler air.

just high enough to be functional

CarMichael Angelo said:
Well of course it’s doable. Of the few that are here that still embrace a carb as a plausible option, I’ll venture a guess that I’m the only one that put one on a 2v 4.6

Today is the day that I stopped turning my nose up at the idea of a carbureted 4.6. This is awesome.

I guess I need to write comment then post pics. Anyway this is what I did on mine for cold air intake. There is some convenient louvers between the headlight and radiator on the core support. I just opened them up and put in the sheet metal box.
Reactions: 1 users

just high enough to be functional

Mr.Kelley said:
I guess I need to write comment then post pics. Anyway this is what I did on mine for cold air intake. There is some convenient louvers between the headlight and radiator on the core support. I just opened them up and put in the sheet metal box.
Click to expand...

It looks pretty good like that. Simple and effective. There are some companies out there that make a replacement for the stock elbow, connecting from throttle body to airbox, that you could add if you wanted better looks and a bit more flow.

That's a pretty nice setup.
You planning on sticking with that filter to throttle body tubing?

I think I'll leave that way for a while. There's no point in a fancy intake when running iron manifolds and single exhaust.

I was referring to the tubing between the maf and tb, I have a C&L tube but you can get exhaust pipe the same diameter with bends then cut at an angle to point towards the filter box, use rubber coupling, they come in different colors, that will make for a better looking assembly, paint the exhaust tubing black or whatever color suites you.
just say'n

One day it will be prettied up, for now it works. I do have plans to dress up the engine bay, some day. Clean up the wiring, paint some things, put in shiny stuff. The whole car is like the engine bay, functions as intended but could look better. Always working the time and money balancing act, you all know how it is. I like how OP, slipkid269, engine bay looks. I just throw stuff up for his inspiration. I wonder if he got his idle issue resolved.
Reactions: 1 user

I can relate to the 'not pretty'.
I'm happy not to get greasy when I work on my crap.

All right. Brief Intermission over. I haven't had anything to post for a while as I had to shift my focus. With winter bearing down hard the days working in the driveway were near an end. So..with help, I built a addition to the garage big enough to store lesser used tools, woodworking stuff and motorcycles. NOW I have room for a car! Granted, it has to be a small car, but the Falcon is inside now! Woo Hoo. Still a bit of work to do on the lean-to but at least it allows me to get back to moving the Falcon project forward again.

I have a pic or two of the lean-to if your interested. If you read back in my posts you will remember I had surgery on my elbo, but I kept going forward every day. At least untill I decided it was time to start a add on. I already, in my default state, have physical issues that severely limit my activities and travel. Add to that a bum elbow and it makes for tuff times gettin things done. AND in the midst of all this, something has happened in the arm delegated to take up the slack in my left arm. I have been to get a MRI on it and it seems I have torn muscles on my shoulder, far more pain than the elbo, which IS doing fine. I tell you what it IS getting old! Before that it was my other elbo and before that my left knee had surgery! Sheesh! I HAVE HAD ENOUGH!!

I will be posting elsewhere later, pics of my brakes. I need to get wheel cylinders and shoes but don't know what they are. Falcons were originally 4 bolt wheels but this has been converted to 5 bolts. Of what? I don't know but its time to get that goin. My bet is that they are Galaxy or Fairlane parts. Maybe mustang. Not sure where to post it yet, maybe under the "maybe mustang" header.....hmm couldn't find that. Swaps? I'll figure it out.

Come on, get on with the pics already

Well there you go, the General is saying post it here. My guess on the brakes would be Mustang. Fairlane and Galaxie had very different spindles.

The popular swap in the day was granada spindles for disc brakes and five lug, iirc 67-9 mustang V8 spindles fit and had disc too. Not sure how to tell the difference.

The ball joint holes on the Mustang 5lug drum spindles are bigger. The Mustang disc spindle is longer. Falcon guys would take the Mustang 5lug spindle and control arms for a basic bolt on swap. The nuances are covered in great detail over on the Ford six website.
Reactions: 1 user

Since your jonesing for pics here is a short Christmas video. Enjoy

Ok, seems the best way was to put them in a gallery. There are some axles pics too. Everything looks in good shape except for the leaky wheel cylinder. It leaked onto the brake shoes and they turned to brown goo like melted crayon. Never seen that! From what I have learned these look like later 68-70ish mustangs? or Galaxie or Fairlane of a earlier year like 64? Nothing I find I feel is definitive. Short of going into Napa and knowing what I need I may have to ask for multiple years and models so they get them in I can compare. I miss the good ol' days when you bring your parts in, the old guy looks at them, goes in back and says heres what you want. Try that at most parts stores now and the kid will go...what is it? Whats it off. And if the computer doesnt spit out the right answer they havent a clue....I digress. So here they are any help is appreciated. 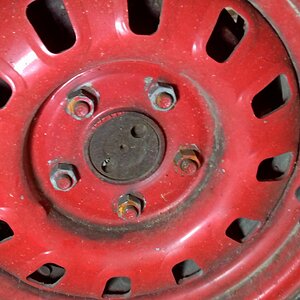 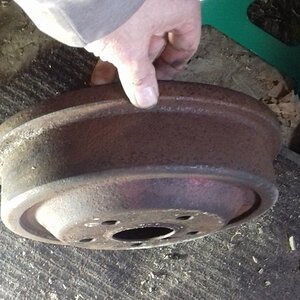 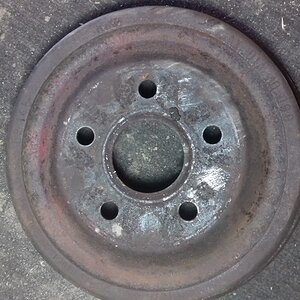 What are these brakes?
Show hidden low quality content
You must log in or register to reply here.

HEY, is this 89' distributor supposed to do this?

I sold my foxbody!Considering buying this SN95!