OK, back in business. My neighbor is a machinist. He just retapped the whole, designed a nut in CAD and CNC'd me a new one. I'm not lucky like that, my neighbor is a taxidermist

General karthief said:
I'm not lucky like that, my neighbor is a taxidermist

Oh? So he can get stuffed done.
Reactions: General karthief

General karthief said:
I'm not lucky like that, my neighbor is a taxidermist

MRaburn said:
OK, back in business. My neighbor is a machinist. He just retapped the whole, designed a nut in CAD and CNC'd me a new one.

You should mark that somehow. A few years from now, you won't recall anything about it.

Ok I have everything reassembled. The right side release now but still feels very tight and I actually think the rotor is warped from being cooked during the initial lock ups... the paint was cooked off. These were Stoptech blackhat slotted. I have some smooth steel ones in the box I will place on and this probably will resolve the issue.

But now Im stuck in the brake lights wont go off. I have taken the switch on and off, and even a new switch and still problems. I saw an old thread about someone saying they had the black bushing in wrong, Im wondering if it's worn out and too thin to keep the stop switch from activating? I'm at a loss on this one.

The end of the booster rod, the flat surface seems like there is more thickness to it than the factory one, which I have thrown away already. Its about a fat 1/4" of metal before the pin hole.

Thanks for any input.

I guess step 1 is do you have the right orientation of the bushings and spacers? Well yes and no. That picture is for a Cougar I read, so the switch actually goes with the open 'hook' end going down, not up, else the switch would be facing the firewall. I see LMR has a bushing kit, if the thickness was wore out then maybe it was cause it to be engaged all the time? I ordered this Cardone one from Rockauto, you had suggested this brand... check the photo. The rod has to be spun 180 to get to go on to the pedal, so it points down, else its too high. Thoughts?

Pointed down is the correct orientation.

even though the switch is upside down, the top photos is still correct. Nylon bushing on the inside, black bushing in the booster rod and then “hang” the switch over the rod. The switch should sit butted up against the flat of the booster rod. If it’s cocked at an angle it will be constantly activated.

Anyway to get a phone up there and snap some pics to try and see why it’s not sitting right? Hard to really guess. Those things are a PITA though as I just did mine a few weeks ago.

Sure Ill take some pics tomorrow. My gut tells me the end of the rod just has too much metal thickness that just activated the switch when installed. I've rocked it etc. I dont have the inside bushing, because I have a black bracket slipped on the end that is the cruise control vacuum switch which acts like the spacer on the inside. I saw an older post where you were helping a user and he stated he had the black bushing in wrong and Im not sure how you can have that in wrong and it fixed his lights always on problem.

The black bushing can only go on wrong if it’s on the wrong side. It has to go on the outside, away from the brake pedal, and be on the closed side of the switch. Putting it the other way can cause it to jam up.

only pic I can find showing what I mean. Too cold to go into the garage and take a pic. I can do that tomorrow. also here’s my Originsl Ford booster to give a reverence on the backside flat. I think I have some pics of my Cardone m-2300-k booster around here somewhere too Here is me installing it again (10 times now, who designed this struggle at Ford? I wanna shoot him, lol).

You can tell its hard to get on, I have to force the brake pin through the switch which makes me think the end of the rod is too thick. I measured it with calipers, it's exactly a 1/16th thick. What is your old one?

Not sure what to do at this point. Could rig something up at the cruise vacuum switch area. 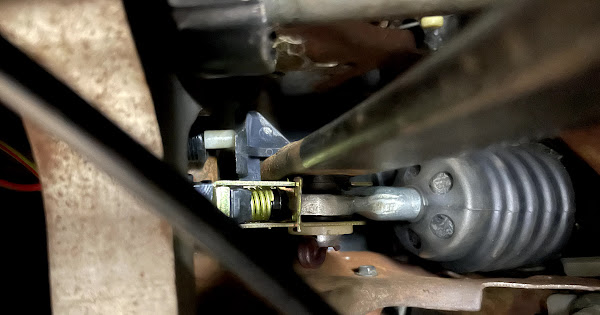 Im wondering what that is right at the back side near the pedal rod that might be pulling the notched side back engaging it. I can tell what that is, maybe the part of the vacuum switch bracket that acts as the washer. OK screw it, I took out the black spacer and it works as expected. Not sure it's long term solution but there is no play in the pedal and I can move on for now, my back is killing me! LOL. That tolerance must be tight and the end of my rod is just too thick I think.

MRaburn said:
the end of my rod is just too thick
Click to expand...

Challenge: who has the nerve to make this a CT?
@Noobz347
@MustangIIMutt
Reactions: RaggedGT and MRaburn

Some people could get hurt me thinks.
Reactions: General karthief

General karthief said:
Challenge: who has the nerve to make this a CT?
@Noobz347
@MustangIIMutt
Click to expand...

I haz not the ability.

Apparently @Private Carjacker is too chicken to do it himself.

Oh, and there is a reason why automotive systems designers don't admit who they are when hang'n out at the local bars.

No Brake Fluid to Driver Side Front Caliper